A fad for grown-ups: The CB radio craze 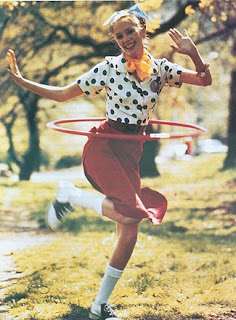 Hula hoops were for kids.

Coonskin caps were for kids.

As a kid, I wanted all sorts of fleeting, ephemeral things, some of which my parents got for me and most of which I don't remember.

But it was my dad who wanted the CB.

He already had a police scanner. He listened to it at night... he slept with it on all night... the better to keep abreast of what me and my idiot friends were up to, he told me.

CB radios are the one fad I can think of from my childhood that was for the grown-ups, not the kids. My dad sent into the FCC for a license to use it. Later -- and currently -- no license is required. But, originally, there was a license issued, albeit without any particular exam or credential.

I never saw him actually use the CB radio; I suppose he must have. He wasn't the sort to buy something and not use it. He did have it on, sometimes, when I was in the car with him. A local intersection that was always under construction was, I learned in this way, called "The Barrels." It took me awhile to figure out why.

I never said I was particularly swift, OK?

I have no idea if he had a "handle" when he was driving on his own. I can't imagine what it would have been.

Curmudgeon perhaps?
Posted by The Curmudgeon at 12:10 PM

I confess to having had and used a CB radio back in the mid-70's when I had my first car, a 1975 Chevy Chevette! Woohoo! Mostly I used it when traveling between New Jersey, where I was stationed at McGuire Air Force Base, and when I was driving home to Connecticut as I had to travel through New York City and it could get hairy at times. Especially for an 18-year old girl in a Chevette!

Most of my 10-4'ing, though, was later done as a police dispatcher!

My post, in honor of CB Day, is up and linked to your blog too!
Breaker, Breaker 19! You got the Avon Lady reporting in here!

Breaker, breaker... I just thought of this the other day when buzzing down the interstate and had to share a lane with trucker - talking on his cell.

I wondered if truckers even have CB's anymore.

I came late to the party and it was not fun because the truckers really resented sharing their channels with four wheelers.

But I had a friend that could talk the talk to a T. It was fun to ride with him and eavesdrop on the chatter.