Math scores, moon shots, and the decline of America 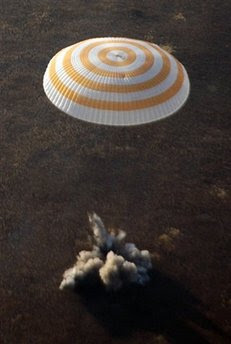 Isn't that a beautiful shot?

It's a photo of a space capsule returning safely today to Earth. One of those on board was American video game designer Richard Garriott, son of retired American Astronaut Owen Garriott.

How wonderful is that: A son following his father into space! So how does this illustrate the decline of America?

The photo comes from China Daily. You can follow the link to coverage on that site, or this link to Steve Gutterman's AP story published in today's Chicago Tribune. If you do, you will find out that the capsule is a Russian Soyuz TMA-12, landing on the steppes of north-central Kazakhstan. Young Mr. Garriott had to pay for his ride.

It's been a terrible week to be an American -- at least if you're an American who hopes for a bright future in this country. India launched its first lunar mission this week. Chandrayaan-1 left a couple of months later than expected -- last September I wrote that the launch was expected in March or April of this year.

But it's underway now. The first link in the preceding paragraph will take you to the Chicago Tribune story marking this world-shaking event. Now, as a registered Curmudgeon, I still read paper copies of newspapers. The Chicago Tribune still has pretensions of being the newspaper of record in Chicago and the Midwest. And do you know where this story ran in our local newspaper of record? Page 10. In a roughly four column-inch hole.

There was another space-related article opposite, on page 11: NASA, it seems, is whining about "unfounded criticism" of its Shuttle replacement program. Jay Reeves' AP story cites a recent NASA report about decreased morale and fear of budget strangulation at NASA. Yet, he writes, "NASA plans to fly a test version of the Ares rocket in late spring or early summer and retire the space shuttle in 2010. The first missions are scheduled for 2015."

We are giving up the sky for at least five years. I have no confidence that we'll ever get it back.

Why? Because of stories like this one, by Dave Newbart, in yesterday's Chicago Sun-Times. Our public schools are turning out kids who know no more mathematics than their counterparts in Third World countries. "Although CPS [Chicago Public Schools] math scores have improved since 2003," Newbart writes, "fourth-graders still tested worse than all but Cleveland and Washington, D.C., in the United States. Just 13 percent of CPS eighth-graders were proficient in math, putting them on par with students in countries such as Bulgaria, Cyprus, Jordan and Macedonia" -- close to the level of students in Slovenia and Armenia and "far below economic competitors such as Singapore, Japan and Taiwan."

Newbart didn't mention India. But he didn't have to, did he? India is going to the Moon. America is going into steep decline.

It doesn't have to be like this. We can make specific, practical demands of our highly ossified education establishment. As I wrote earlier this month, junior high kids need to place out of freshman Algebra I in order to be eligible to take Calculus in high school. Kids who take Calculus in high school have a chance to become engineers. They are the ones who will develop the technologies that will get us back into Space.

Not interested in Space? More interested in "global warming"? Well, who the heck do you think is going to reverse "global warming" -- if it is really caused by humans and not part of the natural cycle of Earth's weather? Al Gore? Al Gore will stretch his mighty tax policy and carbon credits across the land and we will be saved?

Who will save us from high oil prices? Sure gas prices are "down" now -- the cheapest around my house is at $3.19 for regular unleaded as of last night and the national average is down below $3.00 -- but how long will this last? Will tax policies save us from dependence on foreign oil?

We need engineers. We need scientists. We need researchers. We need Algebra I in our junior highs and Calculus in our high schools.

And it has to be real math -- not dumbed down so everybody passes and feels good about themselves.

I will give you one real-life example in closing. As you may recall, my Long Suffering Spouse teaches in a Chicago Catholic grammar school. Our test scores are lots better than the comparable average CPS scores. But, just the other day, one of my wife's colleagues was fuming. My wife's colleague teaches 8th grade algebra and she discovered, to her dismay, that her kids could not solve problems like this:

And her students couldn't do this.

Now she has to go back and address this deficiency when she should be trying to get all or at least some of her pupils to place out of Algebra I in high school. The students' self-esteem is wonderful... but their chances for success in technical fields is already -- at the age of 12 or 13 or 14 -- in serious peril.

curmy i feel really bad telling you this but if a young person cannot make change they cannot get a spaceship in the air either. go figure. it makes me very sad... i recently tried to explain to a young person how .1 was larger than .o5. they never did get it. i even used a nickle and a dime. nope. didn't get it. and this was a high school graduate.

I am a product of the CPS system. Back in the Stone Age the only math courses that were available at my High School were Math 1&2, Algebra 1&2, Geometry 1&2, Trig and Solid Geometry. My eight grade test scores in Math were high enough that I immediately went to Algebra 1 and bypassed Math 1&2. Trig and Solid were electives but I had to take them to get my required 6 credits in math. If Calculus had been available I would have taken the course. I didn’t take Calculus until my 3 year in college and the only reason that I took it then was that it was a requirement to take Statistics, which was required to take some upper level (400 series) Econ courses.

The problem is that the younger generations do not understand the reason why they should take upper level math courses. Even if they are planning to attend college. They are not pushed by their teachers or parents and not taught how math is applied to everyday life.

I've got a good solution to this problem, and it goes like this: make public education universal and compulsory.

Also this: if we live in a world where a grown man can make millions playing a game, then a public school teacher should earn at least ten times as much.

I recently came across your blog and have been reading along. I thought I would leave my first comment. I don't know what to say except that I have enjoyed reading. Nice blog. I will keep visiting this blog very often.