Curmudgeon smuggling garbage to the suburbs

A few months ago Chicago finally admitted that it's "Blue Bag" recycling program was a failure. 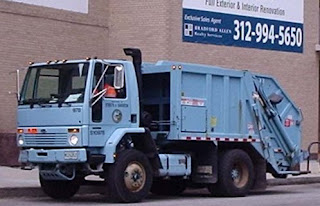 We had always thought it was a fraud. Homeowners were requested to separately bag their paper, plastic or metal recycling. Blue plastic bags were sold in supermarkets and hardware stores for this purpose, which is how the program got its name. Although separately bagged, the blue-bagged recycling was put out with the rest of the trash, collected in the same truck at the same time as everything else, and all smashed together in the back of the truck as the load was periodically compressed.

The bags themselves were nothing special. Although we had to pay a premium for them, the blue bags were more flimsy than most plastic garbage bags. Frequently they'd rip when we'd put them in the garbage bins -- before they were picked up by the garbage truck. Yet somehow, supposedly, people were able to sort the collected garbage and pull out therefrom recyclables, unsullied by their journey in the back of the garbage truck.

I shed no tears when the program was discontinued. Meanwhile, the City promises us that we will someday receive blue recycling carts into which our recyclables may be put. These will be picked up by a separate truck. Golly! Now there's a thought! But we don't have the blue carts in our part of the City just yet. Presumably the division of spoils from the contracts for said blue carts has not been completed. This is understandable, since there are all sorts of federal corruption investigations now pending in the City That Works and people must be cautious.

In the meantime, says the City, go ahead an use your old blue bags. Our contractors continue to sort through it, they say.

But there is a limit, even to my own gullibility.

So we hatched upon another plan, and one that provides an extra benefit.

My mother-in-law lives in an adjacent suburb. They have blue recycling carts there. So we bring her our recycling. (Well, not the newspapers or the aluminum cans I'm now collecting at the office... these will go to the church... but the plastics and so forth.)

And the extra benefit?

Youngest Son has to accumulate 50 hours of parent-supervised driving in order to qualify for his driver's license next year. Some of these hours must be at night. Long-time readers of this blog may recall that my Long Suffering Spouse has interpreted this to mean that I alone must supervise. Riding with a student driver probably never qualified as 'joy riding' -- and especially so at today's gas prices (even with their recent, and probably momentary, decline). So we try and have a purpose when we go out to practice driving.

And now we have a new purpose every Sunday night. Youngest Son fires up the family jalopy whilst I get the bag of recyclables. I sit with it in my lap as we navigate to the nearby suburb... where I jump out and dump our recycling in my mother-in-law's curbside recycling cart.

Saying to myself, "Dignity. Always dignity."
Posted by The Curmudgeon at 9:20 AM

It's a dirty job, but someone has to save the earth!

My sister lives in a western suburb where re-cycling is mandatory (or so she told me several years ago when I was tossing my beer cans in the trash can).

A different truck comes for the recyclable goods.

In our town, the garbage contractor (ADS) picks up our recyclables every other Wed. We just use Rubbermaid containers minus the lids, any color will do. I think that when large cities handle their own pickup can be a boondoggle...et tu Mayor Daley?

I'm all for using another town for recycling since the city makes you recycle and promises to pick up same...but not for you! Governments at any level are the absolute worst at providing services...while isuing edicts!

I forgot to mention, but tomorrow, co-mingled recycling using the mega-monster rolling carts begins here in Astoria. I plan to be up at 0400 so as to be the first in the neighborhood to get our cart out to the road side. Yep, I need to get a life.

This week we are memeing the movement to get it rolling along for November 6th.
You've been tagged by the Queen of Memes!
The Peace Meme