That's the reason I didn't post yesterday: I was doing my civic duty as a juror.

Well, Monday would ordinarily be a day when extra jurors might be needed: Judges don't seem to like to start trials on Fridays, so both Monday's business and business that might otherwise have been accomplished on Friday are on the typical Monday docket.

But yesterday was not a typical Monday because today is Lincoln's Birthday -- a legal holiday here in the Land of Lincoln. So I figured yesterday would be more like another Friday... and no stand-by jurors would likely be required. I had hopes of discharging my civic duty with a simple phone call on Sunday afternoon.

Alas. Persons with names beginning with certain letters of the alphabet -- including mine -- were in fact expected to appear.

My summons directed me to appear at the Criminal Courthouse -- 26th and California. If Disneyland is the 'happiest place on earth,' 26th & Cal may be the unhappiest. Prospective jurors are quickly herded to a large room in the Administration building and told to stay put. Jurors are given adhesive badges and told to wear them -- but only in the holding pen or the courtroom or while being herded from one place to the other as a group. Jurors leaving the building for lunch are advised to take off their badges and put them back on the sheet from which the badges were initially peeled: Gangbangers may be taking note. 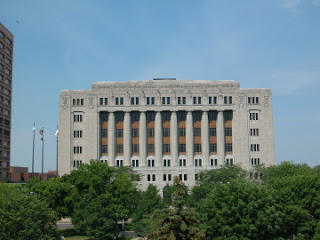 This is the Cook County Criminal Courthouse -- pictured on a day when
the weather was much nicer than it was yesterday. The Criminal Courts
Administration Building is just visible at left.
Cook County Jail is not shown... but it's right there, too.
I appeared at the holding pen as ordered. I filled out my questionnaire -- one of the first questions asks for my occupation -- turned it in and received my panel number. Every prospective juror receives a panel number -- 12 to a panel, I think. Two or three panels are then taken to any courtroom where a jury is required. From this larger group, the actual jurors are chosen by a process called voir dire.

Now I have about as much chance of actually serving on a jury as I have of winning the Lotto. Lawyers are routinely bumped from juries. In fact, at one time, Illinois lawyers were exempt by law from jury service, along with members of their immediate family. As the son of a lawyer and later as a lawyer myself, I was automatically excused from this obligation.

Then, however, some years back, the legislature decided that this was unfair -- and all exemptions were swept away (I think doctors and newspaper reporters were also exempt at one time, but I haven't looked it up this morning). Exempt or not, however, lawyers still are not likely to serve on a jury.

Believe it or not, I wouldn't mind serving.

I've argued to juries -- I'd like to see things from the other side.

But I had no expectation of realizing that ambition yesterday. Even though I had to show up, I still figured on an early dismissal.

I was very surprised, therefore, when my panel number got called.

We were lined up -- badges on -- and herded into elevators down to the first floor. We didn't all fit in one elevator, but we had 'minders' ferrying us in the elevators, shooing any other prospective passengers away.

Deputy sheriffs met us in the first floor lobby, got the panels back together, and walked us across to the courthouse elevators. We were herded into a different set of elevators.

It was here that the system broke down. We no longer had a minder. The deputy did not tell us where we were supposed to go. We got off when the doors opened up again.

Another group joined us -- two of the three elevators full of prospective jurors -- lost in the hallways of the courthouse. The deputy must have been with the third elevator.

And we waited for some considerable period of time before we were found and directed to the actual courtroom where we were expected.

This turned out to be the highlight of my experience yesterday. It's curious: Voir dire seems very suspenseful when you're asking the questions, or listening to the judge or your opponent ask questions, and you're trying to make legible notes and eye contact and evaluate if this person will be more or less likely than the next person to see the case as you see it... but when you're a prospective juror, and you're merely listening to the same darn questions over and over and over again... it's not particularly exciting at all.

I was not chosen to serve; a jury was seated before the court came around to asking me anything.
Posted by The Curmudgeon at 8:58 AM

It's been 36 years since I moved back to my family home in Pennsylvania and would you believe, I have never, ever been called for jury duty? Most people would probably say "Count your lucky stars" or something to that effect, but like you, I would like the opportunity to serve on a jury. Or, at least I think I would.

The Cook County Criminal Courthouse was just 2 blocks away from my High School (Carter H. Harrison). On the rare occasion that I took the CTA to school, I would get off of the bus at 26th and California.

On time we took a field trip to see our judicial system in action. That was the one and only time that I was in the Courthouse.

I was called for Jury Duty only once and dismissed by the Judge during the voir dire.

Nobody ever picks me for jury duty!

i get called every couple of years. i was supposed to go again this month but i had the oncologist write me a note because the medication she gave me makes me want to hang them all starting with the judges (and i would say lawyers but i won't, ha ha) so anyway i got out of it for the very first time ever... and you seem to be entertaining yourself nicely with the hyphens today my friend! ha ha

How disappointing for you. I would really like to get chosen for jury service too, despite all the wasted time just hanging around. Who would object against you, one of the attorneys or the accused?

My husband is chosen almost every year to appear at one of the Cook County courthouses. Why are some people chosen so often while others are not?

I accompanied a friend when she was called for jury duty. I spent my time observing different court rooms. I was so impressed with the goings-on and the judges I observed. They treated the defendants with total respect. The process seemed to be orderly. I left with the feeling that I had seen for myself the "goings on at that 26th and California place" and learned a lot and was duly impressed with the system.
Thanks for the experience.