The High Priestess of Blogdom, Barb, the spiritual director of the Cult of Heads or Tails (long rumored to have been Tom Cruise's second choice), has asked us to meditate today on the letter "P."

So soon after President's Day?

Well, then, we'll have to talk about politics.

It's Primary Day in Wisconsin; Hawaii is holding its caucus today as well. 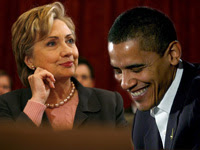 Coming into today's action, Senators Clinton and Obama are still neck and neck in the hunt for delegates to the Democratic Convention.

Obama may or may not have momentum; he's won a bunch of primaries in a row now, but there is that nagging problem of "super delegates."

Lalo Alcaraz cartoon lifted from Yahoo! Cartoons.
Super delegates were invented in the aftermath of the McGovern debacle of 1972 -- when Chicago Mayor Richard J. Daley and his elected delegates were ousted from the convention in favor of Ald. William Singer, a very young Jesse Jackson, and their merry band of activists.

Activism was all well and good, the party leaders decided, but votes are still necessary to win general elections. So an olive branch was extended to those people who'd actually attained elected office; they would be allowed to attend as delegates, too, in the hopes that they might pursue the Party's agenda in the Fall.

Since the invention of these "super delegates" they have been supernumeraries -- they arrive officially pledged to no one and they have had no influence on the selection of the nominee -- but this year may be different. This year, the super delegates may hold the balance of power to decide the nomination.

The jockeying has already begun: Obamaniacs say that super delegates should vote according to the views expressed by their states -- and the Clintonistas say, fine, then we get the Massachusetts Kennedys back. And then the Obamaniacs say something about following the national numbers... well, you get the point.

Now, here's the nightmare scenario (if you're an observant Democrat): Neither Clinton nor Obama arrive in Denver for the convention with enough pledged delegates to secure a first round victory.

After the first convention ballot even pledged delegates may switch candidates. Obamaniacs would then be wooing wavering Clintonistas; Clintonistas could pick off panicked Obamaniacs. The deadlock might continue long into the night. The super delegates would retire to their hotel suites -- historically these would have been "smoke filled rooms" but modern Democrats would never allow that -- and impose a compromise candidate on the exhausted convention. 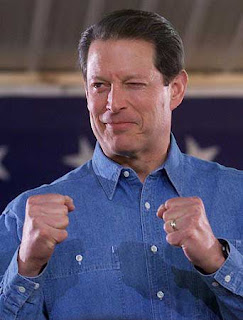 ...a recycled nominee.
Posted by The Curmudgeon at 9:07 AM

Watching the news after last week's primaries I learned the meaning of super delegates.

It certainly is looking like nobody will reach the magic number before the convention. (I'll be watching the news again tonight instead of American Idol.)

LOL at the picture of Gore. Looks like he's thinking, "YESSSSS! I'm BACK!"

No mention of Plagarism?

I was Cruise's first choice, but I turned him down. (Grin.)

Make one documentary and he's flavour of the month!

I love it! Well not really; but, a brilliant nightmare it is.

As for 'superdelegates', you would have to say the law of political unintended consequences is working beautifully here.

So why wouldn't shouldn't the 'superdelegate' scheme not be hatched in such a political place as Chicago??

Although that potential compromise possibilityeaves me squeemish...

I just posted news of a contest I'm having for Heads Or Tails players. Check it out. :)

Wow! I love Gore. I admire Clinton and Obama. But he is king. this was fascinating. Thank you! My HoT is here, thank you.