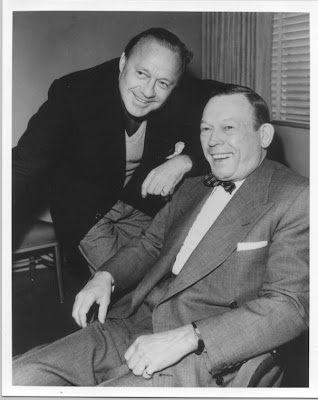 I found this picture of Jack Benny with another of my comedy heroes, Fred Allen, at the International Jack Benny Fan Club. If you've never heard of Fred Allen... well, in feuding with network VP's, David Letterman was virtually channeling Allen for years. Benny's "feud" with Fred Allen provided radio listeners with some wonderfully funny moments... and you can read some of the scripts in Allen's book, Treadmill to Oblivion.

This wasn't the picture I was searching for initially. I was looking for stills from Jack Benny's "To Be Or Not To Be" -- and from the later Mel Brooks version -- so that I could properly acknowledge Patti, of Late Bloomer Boomer, for her splendid victory in my recent pop quiz. Patti knew immediately that Brooks remade "To Be Or Not To Be" -- this was before he figured out that it was even easier to remake his own material....

So, Patti, consider this your hearty virtual handshake and pat on the back. And, for anyone who happens by, as an extra added bonus, let me direct you to a Jack Benny post by famous blogger, TV writer and director, playwright, ex-baseball announcer and rock 'n' roll DJ, Ken Levine: In this August 2007 post, Mr. Levine recounts how he passed up a Beatles concert in 1965 so he could see Benny perform at the Sahara Hotel in Vegas.
Posted by The Curmudgeon at 8:31 AM

Email ThisBlogThis!Share to TwitterShare to FacebookShare to Pinterest
Labels: No Prize Contest

Yippee! I won! Thanks.

I am virtually shaking your hand back, in a hearty way.

P.S. and thanks for introducing me to Ken Levine's blog - I've been reading it for the past half hour or so

I don't really know alot about Fred Allen, but my husband reads your blog too (he doesn't know how to comment) and he said, 'oh yeah, Fred Allen...great great'