Finishing up the candy hearts: Bring on the jelly beans! 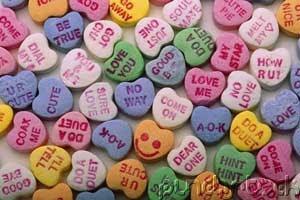 These aren't the candy hearts I'm eating this morning as I try and build up a huge sugar high and buzz through a full day's work by 2:00 p.m.

But they'll illustrate the point.

Candy hearts were the subject of a minor scandal here a couple of weeks ago as area retailers were accused of putting out aged stock.

Unlike whisky or wine, candy hearts age badly: Instead of soft and chewy, they become hard as rock.

I think Long Suffering Spouse got one of these bags by mistake.

She doesn't much care for candy hearts -- she's one of those people who actually likes what is good for her and almost always rejects what is bad -- which is merely another illustration of how opposites attract, I suppose, but I digress.

Anyway, she came home with a bag of large-size hearts for me.

I was suspicious when I opened the bag and looked at some of the messages:

You're the bee's knees

Dial my number
My other clue was that the hearts were in black and white, not color.

Of course, I ate them anyway.
Posted by The Curmudgeon at 8:40 AM

Email ThisBlogThis!Share to TwitterShare to FacebookShare to Pinterest
Labels: Just for giggles

I prefer chocolatized candy. Haha I just made up a word.

Hope you are enjoying your sugar high this morning.

Yeah, that "23 Skiddoo" has to be a bit of a big clue as to the age of those things. However, since you say with age they get hard, then I'm thinking retailers in this area have all been peddling old goods for a long, long time cause that's the way they've always arrived since I can remember eating them -hard as rocks basically. Do you think there a possibility of a class action suit here?

You have to be careful getting those giant gumballs out of the machines in restaurants and the video store as well. Sometimes you'll break your jaw on them if they're too old. Of course, then everyone in the store knows if my kids get one like that because they start screaming.

I wonder how this story went down over Valentine's, did it affect their sales?

See I like the Valentines-to-Easter candy buzz, but I do mine on chocolate. Mmmmm, See's candy.

Hubba, hubba, ding, ding! Sounds like my kind of candy. I really never had those litle candy hearts that were not hard. I thought that was the way they were supposed to be. Actually, ancients just suck on them anyway!

Hi Curm,
I e-mailed you the other day..did you see?

Hahahaa! This post is a very good example of why I just passed along an award to you. :)