Mel Brooks and Jack Benny Month -- and, yes, Your Honor, I can tie this up

It was a lazy Saturday morning in the Curmudgeon home. Long Suffering Spouse and I were channel surfing and -- it being too early for most of her contemporaries to be active -- Younger Daughter was sitting in the room with us. 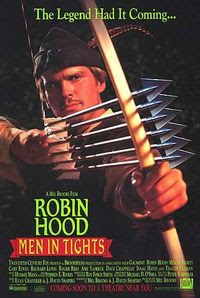 I enjoy Mel Brooks. I find most of his films funny, if a tad... excessive. I think, for the most part, the Robin Hood parody stays more on the funny side than the excessive side. But there are... excesses.

It was the excesses in this film that made Younger Daughter uncomfortable. If you've seen the movie, you may recall the scene in the outlaws' camp where Robin serenades Maid Marian, standing behind a sheet for privacy, but the fortuitous placement of a campfire behind the couple projects their shadows on the sheet as if it were a movie screen... and the outlaws take seats in front of the screen, just as if they were in the theater. They guffaw when the shadow of Robin's sword might be confused with something else.... Younger Daughter wasn't uncomfortable with the sexual references in the film -- despite my active disapproval, or perhaps because of it, she watches MTV whenever she can. The current programming on MTV seems to consist of nothing but sexual references. I'm so old I can remember when MTV had music videos, some of which, a few anyway, could be watched by every member of the household. But I digress.

What made Younger Daughter uncomfortable was watching the sexual references in the same room with her parents. I know about her discomfort because she told us about it.

Now you know how I feel, I told her. 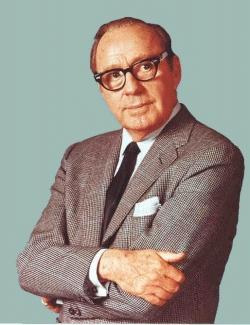 I was fiddling with the computer when it came time for Chuck Shaden's "Those Were The Days" program. Locally, the program is broadcast on WDCB-FM, the College of DuPage radio station; the link takes you to the program website where you can listen to last week's program.

In the course of a four hour program, Shaden and Company will play four complete Benny episodes. I don't tune in for "Suspense" or "Little Orphan Annie" -- I want to hear Benny.

No one was in the room when I put the program on.

Yes, the audio quality is often poor. That makes it a challenge to listen -- sometimes it makes it painful to listen. The songs are dated. Cigarette commercials are anything but politically correct.

But Benny is still funny. And there are no crude references to embarrass any member of the family.

And it makes me sad to realize that there is nothing like him in the entertainment world today. Even prime-time TV is chock full of sexual and excretory references.

And those are just the commercials.

The folks who tuned in to Benny's radio program -- people of my parents' generation -- are a dwindling remnant. As these people leave us, these programs will be lost.

And we'll all have to watch TV in separate rooms.

I have no clue what movie that might be -but I do so agree with your post about Mel Brooks, "Robin Hood-Men in Tights" and Jack Benny! Jack Benny was a classic - just a class act! I remember his old show and another I loved too whose comedy was hysterical (at least to me back then) was Red Skelton. I don't consider myself to be a major prude but commercials especially often really offend me. I've never been a fan of MTV or any of those channels - we get VH-1 on our cable now but not MTV. (Some parents in the area had objected to MTV to the cable company and they gave us the VH-1 instead.) Have you ever watched a program called "Jackasses?" I forget what network it is on, but my son and I watched it together a few years back when he was living in a more "metropolitan" area and boy, talk about explicit! That show is it! I don't think ANYTHING is sacred on it.

I made the mistake of watching Sex and The City with my parents once. I think I was probably about 35 at the time but I still didn't make that mistake again, ha ha.

Can I just say - it's awkward having kids sometimes.

Actually. I think they might say, "it's awkward having parents."

I prefer the Benny/Lombard version of "To Be Or Not To Be" over the Brooks/Bancroft version.

Also if anyone is interested in listening to these mp3's email me at theduke at(@)geozazz.com I will email them to you as an attachment.

What about Red Skelton? Do you put him in same class as Jack Benny or some (only some) of Jackie Gleason's work.