A snowy day in Chicago 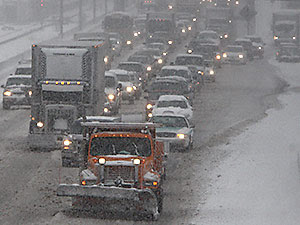 Wes Pope's image of traffic this morning on Chicago's Eisenhower
Expressway captured from the Chicago Tribune's web page.
Gloat all you want, Sunshine Belt readers -- but I was on time for my 9:00 a.m. court appearance this morning.

Of course, we did have to move Heaven and Earth to get it done.

It was supposed to be a complicated Friday in the Curmudgeon household even without the snow. Long Suffering Spouse had been drafted into going along on a school ski trip. She doesn't ski and doesn't want to learn... but she does want to get paid, so of course she assented.

Middle Son called the other night to ask if he could have a car on Friday. He's away at college, but not that far away, and there was a job fair in the western suburbs that he'd been told he should attend.

We are interested in him obtaining gainful employment upon graduation, so we agreed... even though only two of our three cars actually work at the moment and Younger Daughter would have one of them, taking her brother to his school and then proceeding to her school for the 7:00 a.m. Band class.

But, I thought, I could drop Long Suffering Spouse at school -- the kids were going on the ski trip by bus -- go to Middle Son's school and have him drop me off at the Lake Street 'el.' He'd drop me not far from where this photo was taken. With baseball practice and what not, he'd not bring the van back until Saturday sometime, but Younger Daughter would be home in time to pick up Long Suffering Spouse after her ski trip. Even with teenagers we ought to be able to live with one car for one day.

All neatly planned and reasonable.

And then it snowed.

It was supposed to flurry yesterday during the day, with the heavy snow to start late at night. But the weather forecasters forgot to tell Mother Nature. It snowed pretty much all day yesterday, with the pace picking up just in time for the rush hour.

Now we pride ourselves on being made of pretty stern stuff in Chicago. A couple of inches of snow, or even three or four, will not faze us... unless the snow comes down during the rush hour. Commutes that take an hour in rush hour normally, stretched to three or four hours yesterday. The late news was chock full of traffic horror stories. With more forecast... well, my carefully crafted plans were already in jeopardy before the late news was over.

Younger Daughter's school announced it would open late, at 10:00 a.m.

Youngest Son's school announced it would open late, too, but at 9:00 a.m.

I could still take the van to Middle Son, still drop off Long Suffering Spouse for her ski trip, still have an expectation of getting downtown within a reasonable time after boarding the 'el'... but how early would I have to leave to make this happen?

When the alarm went off this morning at 5:00 a.m. I did something unusual: I actually got up.

Long Suffering Spouse chided me about not getting dressed for work first as I pulled on my sweats, but I figured I'd get a pretty fair cardio workout behind the shovel, after which I'd need a shower. Why shower twice?

Long Suffering Spouse reluctantly agreed, but said we should wake up Younger Daughter and Youngest Son too and enlist their aid for shoveling.

I did not argue the point.

But shovel they did. And shovel we did. And the snow fell faster as we worked, mocking us, I thought.

After an hour or so of this fun family activity I came in and called Middle Son.

But he called back promptly and I was eventually able to talk him out of taking the car today. Obviously, if he doesn't have a job immediately upon graduation, today's incident is likely to be dredged up as an example of how his unemployment is entirely our fault. But I honestly thought that, even if I'd been ready to leave right then, I had no chance of getting to him and then to the train in time to make it to court at 9:00 a.m.

I continued checking the school closing list during this time, as I sipped my coffee and waited for my chest to stop heaving. Sure enough, Youngest Son's school decided to close... then Younger Daughter's school made the same decision.

But Long Suffering Spouse's school wasn't closing. Every neighborhood parochial school was closed... except hers. The school policy is that the school will close if and only if the Chicago Public Schools close. That means almost never -- if for no other reason than so many kids depend on CPS for warm meals during the day. So Long Suffering Spouse was still stuck on the ski trip. And she wasn't happy.

We left for the train and she was still grumbling. It makes sense to go skiing when it's snowing, I told her, but that was not deemed helpful.

I was on the station platform, waiting for the train, watching the traffic on the Kennedy move at a snail's pace, when my cell phone rang. It was Long Suffering Spouse: School would remain open... but the ski trip was canceled. The buses couldn't get through.

But I was on time to court... which was a good thing because the judge was on time, too.

But now? I'm bushed and it's not even lunch time yet.

Congratulations on getting to court on time. Your life seems very complicated domestically. Today we had a howling gale. I have never seen quite such surly weather and we had a variety of frozen precipitation, including a brief flurry of snow that was lovely for a little while. It did not accumulate as in your photo -at least not up here. "The snow gates are closed on the A9," which I think means that the major road between here and down south is closed. No one in their right mind would travel the Berriedale Braes in this kind of weather but often people not in their right minds get behind the wheel of a car.

We've got rain today - just rain - and I'm thankful that's all it is as it requires no shoveling.

Best wishes for a better weekend!

I only recall the Public Schools that I attended in Chicago closing for one day. It had snowed for three days in a row. When the snow stopped falling it turned colder. Much colder!

It’s was 23 degrees below zero without the wind chill, on a Monday morning. I walked to school as usual (nearly a mile). It was faster to walk than to take the CTA.

Even with three layers of clothing on my body and wearing a heavy duty Parka, a muffler over my face and ear muffs and a winter cap I was freezing when I reached the High School.

As you have said they never close down the public schools.

When I arrived they told me that classes were suspended for the day – too many teachers had called in saying that their cars would not start and/or they couldn’t get out of their of city street parking space.

After warming up inside the school, I headed back home with the biting wind in my face.

*whistling* and shutting up. glad you made court on time!

Beach bum just gave me a great idea. Next time the weather is this bad (or worse), I'll organize my colleagues to call off! Today, only half of 'em did. The rest of us were late. And only 7 of my 26 munchkins showed up. If we all work together, we can revive snow days in Chicago!

As an American living in the Philippines, I enjoyed another beautiful day. One of 365 a year.

If day shift is 9 to 5 and night shift is 11 to 7..... what do you call 5 to noon? Are you a dayswinger? You are definitely going to need more cars in your family. My son has four children and they have five cars, because the youngest one just got her license and uses mom's car. Their driveway looks like a parking lot. They live just east of you in Ohio, so the leftover snow from Chicago just rolls right over there the next day.

We never have enough cars at our house. Two cars for four people just isn't enough. But then there's the money thing.