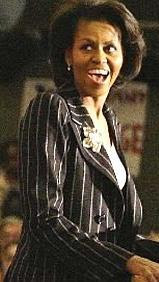 Michelle Obama is backpedaling now, trying to explain what she really meant when she said -- in reacting to her husband's latest primary victories -- "For the first time in my adult life, I am really proud of my country. Not just because Barack is doing well, but I think people are hungry for change."

A lot of folks have jumped on Mrs. Obama for this one, and rightfully so. I don't agree that this indelibly brands Mrs. Obama (and by inference her husband) as a member of the 'Hate America First' crowd -- because I prefer to think that this was a particularly ill-advised instance of Mrs. Obama speaking without notes and without adequate forethought. However, even assuming she did not mean what she said, it was still an incredibly odd, stupid and awkward thing to say. It is the kind of sound bite that will leave marks. In the short term, it will slow, and may derail, Mr. Obama's momentum. And, should Senator Obama be nominated by the Democratic Party, it will be resurrected during the Fall campaign.

Without mentioning Mrs. Obama, Cindy McCain, wife of presumptive Republican nominee John McCain countered, "I have, and always will be, proud of my country." There's a statement that can't be woven into an effective attack ad.

I hope I am as patriotic as any American, and I know I consider myself blessed to have been born and raised here. But am I always proud of America?

I'm not so proud of that. Are you?

I could make a list... but I won't. I will sigh instead and recall the rule that Winston Churchill said he followed for criticizing his country: "When I am abroad, I always make it a rule never to criticize or attack the government of my own country. I make up for lost time when I come home."

In the Internet age, where anything anybody says can go from Peoria to Patagonia in a nanosecond, that's no longer a viable approach. Michelle Obama was waaaaaaaay off base -- but must public figures take Cindy McCain's approach to protect themselves against charges of being anti-American?

I don't think any honest, right-thinking person could say that they have always been proud of their country. The prisons in Guantanamo, the way imprisoned Iraqis have been treated, just to mention a couple recent events are nothing to be proud of. you can love your country knowing full well that it is not always right and correct,just as we are not and our kids are not. Loving and accepting and being proud of are separate.
I think Michelle's comments come to another "home truth" which is that it may be a little bit harder as a Black American to feel proud of the country's achievements which too often have come at the expense of Black Americans or without recognition of their contributions to the achievement. I hope other commenters respond to that last bit because I would genuinely like to know what all they think of it.

curmy i think the paris hiltons and that stuff is not "america" but an american doing something stupid. and yes, i am always proud of america, just not all americans. hope this makes sense and i believe that is what mrs. mccain was saying. as for mrs. obama, i will give her a break, she misspoke, that's all i think.

It's unfortunate that for most of the world, all they see are the Britney's and Paris' and Lindsey Lohan's...and not the things that really matter.

And if Michelle Obama hasn't been proud of her country, that's her right, isn't it? We don't have to agree with her and she's not the first person to say something (or put it up on their blog) and then maybe think "that probably wasn't the best thing to say".

I'm getting a bit tired of the immediate and forceful responses of all our candidates and their families lately. I seem to remember Natalie Maines saying she was not proud to be from the same state as Bush and catching a heap of trouble over that, and she has every right to say it. It's just her opinion, everyone has one. And there's mine.

God said something about "Hating the sin and loving the sinner". So, I still am proud of a sinful America and try to love the people who commit the sins. It's difficult to understand how Sharon Stone can go to a foreign country and bad-mouth a land that has provided her with wealth and fame. It's a hard to understand how Mrs. Obama could not be proud of living in a country that has gone from slavery, through civil rights to having a black man running for the highest office in the country. It would appear that we are indeed becoming color-blind and I am proud of that!

Needless to say, the Old Sarge was offended by her comment. I have responded at my place about that, however it seems to me that the hate George Bush crowd is quick to defend her. Your commenter who spoke of Guantanamo obviously has no idea what is required to defend a nation, some things in war are distasteful but necessary.

I'll be back to read this post (I'm much more political than I used to be) later tonight, but I wanted to tell you now that you are officially Tagged.

It's an easy and fun meme!!

I'm glad I never said anything stupid. (rolling my eyes).

I think you and Winston would have been great pals.

We absolutely love Winston here at our house.

I did enjoy the quote of the Dritish Bulldog, Sir Winston. As for Michelle, she didn't script her statement, so I'm not going to castigate her, although she needs to choose her words with better care in the future...

Frankly, I think the big news in all this is that finally one of the Republican wives actually said something publically!

Everything else is just static.

Michelle Obama is a smart woman who said a dumb thing. She needs to think before she speaks.
And anyway, she isn't the one running for office. Who cares what her opinion is?

This is a great thread. I am a bit stumped about how one can be proud of America but not of Americans. Isn't America the sum of it's people?

Thanks for commenting on my blog about this, how interesting, we don't get to hear about this kind of detail in the UK.

I think it's helpful to have been outside of America sometime in ones life to put our country in perspective. It only took me a short time of living outside the U.S. to really appreciate how great it is. For Michelle Obama to say it's the "first time" she's ever been proud of the U.S., and only when she's getting what she personally wants out of the situation, tells me that she is rather spoiled and shortsighted.