The Curmudgeon's guide to attending church as a family 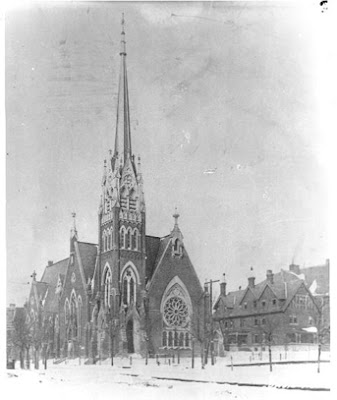 Today is Palm Sunday and, in Catholic churches at least, the Gospel is the entire Passion of Jesus.

So it's traditional, at least in my parish, that the congregation remains seated for almost the entire reading. Part of that is to accommodate the old folks who might have trouble standing so long. But I think another reason is for all of us to enjoy sitting because next week the Easter-only Catholics are going to show up and we're going to have to stand though the entire Mass!

Some people avoid church like the plague... but others are skittish about attending, particularly as a family. And one of the biggest reasons for that is the fear that, well, the kids will misbehave. Especially the little ones.

I know I was in this category.

Actually, I was in both of the above categories -- when I was a student at a Catholic university, I told people I didn't attend Mass because I was a Druid -- but, after Older Daughter was born, and when Long Suffering Spouse insisted, we began attending as a family.

Older Daughter wasn't a particularly fussy baby but we didn't want to disturb the old women at prayer, working their Rosaries. They sure looked intimidating to me.

So we tried the "crying room."

This should have been called the Ritalin Room. We were in the very back of the church, watching through a glass window with the sound piped in. It was like watching Mass for Shut-Ins only we had to drive to get there. And the children!

There were children who looked old enough to shave bouncing off the walls and ceiling. I think I got bruised after a couple ricocheted my way a couple times. I was worried Older Daughter might pick up life-long bad habits.

The next time we made the attempt (and it may not have been the very next Sunday) we resolved to sit in the congregation and take our chances.

Now imagine you're in church holding a baby. You're looking straight ahead, but the baby is looking behind you, over your shoulder. And Older Daughter was doing very well, keeping quiet... until the Homily... when all of the sudden she began to gurgle and coo and make happy noises.

I looked away... and a few minutes later, the gurgling started up again, rising to a kind of a chatter....

I turned around again... but it was just the tops of heads again... so, deeply puzzled, I jollied Older Daughter back into a quieter mode and went back to my business.

And it started up again! This time I didn't turn around immediately... I let it go on a bit... and then -- quickly whipped around -- and caught the old ladies making faces right out of a Three Stooges movie....

Lesson No. 1: They may look scary and reverent, but the old ladies are all grandmas at heart. And they're Devils! They are trying to jolly your kids. So don't sweat it: Crying babies need to be taken out... but leave the happy babies alone... and make the old ladies happy.

Feel better about trying to come to church now?

We'll see you Sunday. I'll be the old man standing along the wall trying to get your baby to giggle....
Posted by The Curmudgeon at 11:27 AM

As a father of five, you know whereof you speak.
I guess my husband and I avoided this fidgety baby in church problem by not taking Kid One and Kid Two to any church until they were 12 and 10.
That was slightly more than six years ago. Now we attend our church every Sunday.
It was amazing to see how many folks suddenly showed up this morning, Palm Sunday.
Even more will be there next Sunday.

My favorite baby story was having to sit way down front with our first. My husband held her over his shoulder after we fed her and, you guessed it, she upchucked all down his back, all over his suit coat. Every person under the age of 16 was giggling like mad (a few over 16, too!). And my poor husband had to walk the aisle with barf steaming down his back. Boy, those were the days!

Oh, church lady stories, I love it! I spent many years in a black Baptist church. At first I was terrified of the church ladies because their moral strength is awesome in the true, traditional sense of the word, but babies bring out the best in all of us. I swore I would never be "that kind" of an old lady to play with babies but you know what, I am and I am unashamed about it! Thanks for letting me proclaim my grandma-ness.

I never understood the "quiet room" it was never that for those who had to sit there....when I was growing up they didn't have one of those....you just prayed that baby would settle or outside you went with baby....there always seemed to be a baby in moms arms or dads....I mean with 12 children....and boy if you made a peep in church my dad had the longest arms and we got a good cuff on the back of the head....ah yes Sunday Mass....and Easter was the worst as it was so very long...now with Easter week upon us...there will be Holy Thursday, Good Friday....for the truly devote Easter Saturday and then Easter Sunday....I had never seen so much of the inside of the church as I did during the Easter week....haven't been in years....got tired of standing....

so, you are one of them...those people always crack our boys up...and you're right about that room, we are staying away from it, it is not a good training place for kids, unless you want them to be happily screaming the whole church service:)

Grace -- isn't it amazing how you keep the diaper on your shoulder as protection... but the kid waits to upchuck until you shift just for a second to the other shoulder?

And May -- I'd probably be an usher by now... except they're understandably skittish about letting a lawyer anywhere near the money....

I'm less faithful than you, but I grew up Lutheran; and, my family members for the most part are still churchgoers.

A cousin got married year before last and on Sunday, following the Saturday wedding I had no credible excuse to avoid attending services with my family.

I sat with another cousin, his wife and their maybe one and a half year old son. Little cousin was fascinated with my shoe laces but lacked the dexterity to do much more than paw them. Mrs. cousin, having been brought up in the children shall behave in church school of child rearing, kept pulling his hand back. I smiled and whispered that he wasn't bothering me, not saying that it was a pleasant distraction from what was going on up front. She was having none of that and handed little cousin to cousin who carried him to the Narthex and paced for the rest of the service.

Finally, I tried your Druid line when I worked for a corporation years ago that gave workers Good Friday afternoon off, if they were attending services. Pat Cleary, my Irish Catholic manager, after I explained what a Druid was and my theory that I should be given the afternoon off to commune with nature, got more red in the face than normal and told me to get out of his office.