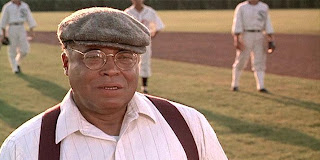 "The one constant through all the years, Ray, has been baseball. America has rolled by like an army of steamrollers. It's been erased like a blackboard, rebuilt, and erased again. But baseball has marked the time. This field, this game: It's a part of our past, Ray. It reminds of us of all that once was good and it could be again. Oh... people will come Ray. People will most definitely come."

It's finally Opening Day. The fickle Chicago weather spirits are wearing Silver and Black this year: We're supposed to have a beautiful afternoon for baseball.

Oh, and that other team is opening in Cincinnati.

Actually, I've never really hated the Cubs. I know that Sox fans are supposed to hate the Cubs and vice versa, but I save my serious opprobrium for the Yankees. And, lately, the Twins.

I actually even flirted with following the Cubs, briefly, in 1969. I was young then, and naive. And the Cubs were in first place -- and the Sox were so far out of contention that it seemed they might be demoted to Triple A. There was a serious danger that the Sox might even be relocated to Milwaukee. So I listened to a couple of games. But only on the radio. And I felt dirty and ashamed -- and I never did it again.

This past winter the Cubs have spent $300 million on free agents and the Tribune Company has handed the bill to Sam Zell.

But I like the Sox' chances better this year. Why not? It's Opening Day... when anything can happen.
Posted by The Curmudgeon at 9:18 AM

Email ThisBlogThis!Share to TwitterShare to FacebookShare to Pinterest
Labels: Family, News and Views, The Sporting Life

Remember, MJ, Sox fans loved Harry when Cub fans still remembered him as the guy who used to broadcast for the hated Cardinals.... later, we thought it was so nice of the Cubs to give Harry a chance to keep broadcasting in his golden years....

and the Cubs are being sold! but I cannot see the story because all the fuss over the Tribune (which by far is my favorite newspaper, ever)... and it is 1-2-3 strikes your out at the ole' ball game....

I'm a Dodgers fan so we share the same loathing for the Yankees, but baseball is great no matter who's playing.

I'm Cubs fan but I also occasionally cheer for the Sox, especially if one of my Fantasy Baseball League players is a White Sox.

The teams I dislike the most are the New York Mets, closely followed by the Yankees.

I'll watching Baseball from one this afternoon until after midnight. And toggling my digital remote constantly.

I don't watch much TV sports....I watch some of the world series but that's about it....I find the whole ritual thing they do just so....ritualistic...the scratching of their crotch to give the signal, the spitting in the glove...the stamping or dragging of the pictures foot just before he makes his pitch...the fake throw to first base....oh get on with the game would ya......

It took 7 years for Wembley Stadium in London to be built. A few might come.

Loved "Field of Dreams" and because it's Opening Day and anything can happen maybe the Red Sox could get their act together and do something right this year!

Linda -- with the money the BoSox spent... well, I agree it was important to keep Daisuke Matsuzaka out of the hands of the hated Yankees. And I hope Boston buries the Yankees... I just don't want to hear so much about it in Chicago. Please. You'd think ESPN had only two cities to cover!

Actually the Red Sox were always my second favorite team. White Sox -- Red Sox -- get it? If I'd known about the Utica Blue Sox when I was six I would have thrown them in too. If they were around when I was six....

I love the film "Field of Dreams" and have seen it about five times.