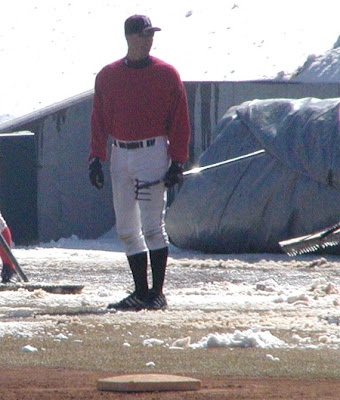 I got these images from The Big Red Report, an "an unofficial and independent source of news and information" devoted entirely to athletics at the University of Nebraska.

Yes, that's snow on the ground.

There was no snow on the ground yesterday in Chicago, although there has been snow here, and recently, too.

At one point yesterday, we are told, the temperature reached 70 degrees in Chicago.

If this is true, it wasn't true for long.

The Sun went down, the temperature went way down, and the winds came up: Youngest Son had a game last night.

I was late getting there, of course, although it was not entirely my fault: I did not leave the Undisclosed Location as promptly as I'd hoped, but when I finally arrived in the subway, I saw a train sitting at Monroe, the next stop down. 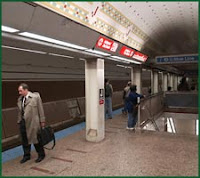 From the my vantage point a couple blocks away I could see the red and yellow lights on the sides of the cars facing the platform -- meaning that the train was standing with its doors open.

It stood for a long while. I could even make out the headlights of another train directly behind it.

In the meantime, the platform at Washington -- which had been relatively empty when I strolled in -- had swelled in population to the point where hopeful commuters were two and three deep along most of the platform. I was thinking I'd probably have to take the following train if I wanted to sit down... but eventually the train closed its doors and moved two blocks to where I was standing. It moved slowly.

But there were seats! And I'd guessed well as to where the train would stop: A door was right in front of me. I scrambled in and pulled my book from my brief case.

It's a juggling technique I use: Some people carry a to-do list. I carry all the files that are on my list -- at least all that I can. So I had a briefcase and a redweld folder -- and my coffee cup, of course. So sitting is really important for me: I'm a hazard to other commuters otherwise.

Absorbed in my book, I didn't realize that we were creeping slower than usual. We must have limped into the Division and Milwaukee station. But I noticed then, eventually, how long we were sitting in the station, again with the doors open.

People began to get off. A CTA employee came by to shoo us along. The train was to be emptied, he said. Reluctantly, I complied. As a straggler, I had prime position by an open door when... surprise, surprise... the same CTA employee let us get back on the train.

He also told us the train would run express to Damen. He had to tell us, because the usually loud and obnoxious speaker in the car was not working. It was kaput.

But nobody told anyone at Damen about the broken speaker -- and that's why a host of unwilling passengers on my car were conveyed, express, from Damen to Jefferson Park.

I get off beyond Jefferson Park, so I was not unhappy. I was merely very, very late.

Long Suffering Spouse met me at the train. Another family had driven Youngest Son to his game from the school baseball practice: Yes, for the next couple of weeks he'll probably be on two teams.

I changed clothes quickly and put on my winter coat. Long Suffering Spouse questioned that decision, but only momentarily: She took her parka, too.

I ate in the car on the way to the game.

That's the way it is in baseball season in Chicago. In the nice weather, when the kids were young and all still playing at Bluejay Park, I'd walk over from the train and meet Long Suffering Spouse and we'd have a sort of picnic. She had a cooler with sandwiches and pop and we'd wander from diamond to diamond checking in on our offspring's various contests. Usually we'd arrive just after our son or daughter batted. Timing is everything in this world.

But now that the kids are older we must drive to all of their increasingly far-flung games. And I eat in the car. Gracious living at its best.

Our van has a thermometer built in above the windshield. It was 50 degrees when we got to the park.

This park is one of the nicer ones available for youth play; it even has lights.

On a night like last night, this was a mixed blessing: With no sun to provide even the illusion of warmth, we were quickly chilled to the bone.

Youngest Son's travel team has spiffy uniforms -- home and away uniforms, mind you -- and the kids all have huge bags for their equipment, duly emblazoned with each boy's uniform number and the team logo. But all the equipment in the world can't help you field a ground ball or make an accurate throw, especially on a cold, windy night: Youngest Son's team did not prevail.

The temperature was in the mid-40's when we got back in the car at the end of the game. We had to give another boy a ride home -- and Younger Daughter called in the middle of all this with something she absolutely had to have for school today. So we had to make a stop at Walgreen's lest Younger Daughter fail Chemistry. (It is just possible that Younger Daughter may have known about this requirement before yesterday -- but she will admit nothing.)

But, eventually, we arrived home. It was shortly after 9:00 pm. Youngest Son could now eat dinner and start his homework.

Which brings up the question posed in the title of this essay, doesn't it?
Posted by The Curmudgeon at 7:14 AM

While you have the snow, we have a heatwave here in the UK, newspapers are saying that our spring is the new summer. I dread to think how hot and humid our summer will be.

I'm sure your long-suffering spouse and student daughter brightened up your doomed day. As the saying goes, things can only get better.

I have just posted on the Virginia Tech massacre and the role of social media, btw. Hope you are recovering well.

The players have to sweep up the snow?

Jean Luc -- They do! It's part of maintaining the field -- wiping out puddles, raking and smoothing the infield and pitcher's mound...

The pros play on immaculately maintained grounds with professional groundskeepers -- and, of course, the Dads do the maintenance for the little kids -- so it comes as a terrible shock to a boy when he turns 13 or so and moves up to Pony ball that he's expected to do all this work....

By college, the age of the young men in the pictures, they're used to it... and hoping for a day when they can turn pro... and turn the groundskeeping chores over, too.