That's what Long Suffering Spouse said when the line score came up as the Sox broadcast went into a commercial break.

And I hadn't noticed.

I'd gotten home late and didn't turn on the game until the 5th inning -- in time to see Jermaine Dye's grand slam. Dye's been hitting poorly of late and Youngest Son was threatening to cut Dye from his fantasy team. (Yeah, that'll teach him.) When Dye hit the home run I wondered if Youngest Son had made good on this threat -- making a mental note to tell him to cut all the White Sox from his team if he had. We could use the offense.

So I did not notice just how well Buehrle was doing -- until Long Suffering Spouse pointed it out.

Without saying any more than I've already said she said, of course. Because even in our den we might jinx it. 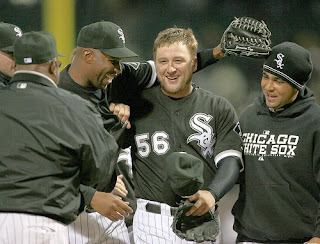 Fast forward to the end of the game: Buehrle completed the no hitter.

The phone rang. It was my friend Steve -- who shares White Sox season tickets with three other people. I'd seen that he was on line; I knew he wasn't at the game. I greeted him with "Who had the tickets tonight?"

It's still cold in Chicago -- and the Sox had been drubbed by the Rangers Tuesday night. We speculated that the guy who had the tickets might have given them away -- just as Steve had done the night before. If he did give the tickets away, he'll never live it down.

Middle Son responded to my IM just after I hung up the phone: He'd been watching the game in someone else's room at the dorm. I typed that Buehrle said, until tonight, he'd never pitched a no-hitter at any level -- although he pitched part of one, maybe two innings or so -- in a high school game.

Middle Son typed back: "Then I've done something Buehrle didn't do."

(I've cleaned up the spelling and punctuation. Apparently only old fogies like me worry about bothersome things like spelling or grammar when instant messaging.)

After a pause, presumably picking up on the fact that I didn't know what the heck he was talking about, Middle Son typed, "Well, it was Summer ball. I don't know if it counts."

I could think of a couple of very good games Middle Son had pitched in high school summer ball... but a no-no? No -- I was still blank.

"It was against Evanston. And I went to football practice right after."

Ah, that's it, I figured: He probably didn't even tell us about it... because he went straight to football practice. Long Suffering Spouse agreed with my reconstruction of events -- and I typed that to Middle Son, too.

But he didn't. I may forget a lot -- but not that. I think we've offended him, though.

Youngest Son got home around this time: He'd been at... where else? ... baseball practice. Last night, at least, was at an indoor facility. Another family drove him. He didn't even say hello. Instead he greeted us with: "Tell me you watched it."

Which brings me to the punch line.

Oldest Son -- the most fanatical White Sox fan in the entire Galaxy -- didn't respond to my IM last night -- but his away message this morning was, "The one night I don't watch the game...."
Posted by The Curmudgeon at 1:23 PM

You know, it's probably not right, but my team changed colors and announcers this year and I just can't get past the new colors.

The announcer, at least, sounds like the old guy, so that's good. But I just don't feel like I'm watching my team anymore, they just don't look right.

this is sports, right curmy?

Got to love a ao casually inserted non sequitur.

"The song also gained some measure of fame when Dave Marsh, in his Book of Rock Lists... named the version by the Human Beinz 'The most negative song to hit the Top 40,' noting that the word 'no' is sung over 100 times in a mere 2:16."

I'd do further research to nail down the number; but, I think I'll rely on you to post further.

My husband is a Sox fan, but their socks are Red.
And they hail from Boston.

That's almost all I know about baseball.

Congrats to all of you Sox fans who didn't notice... that jinxing stuff is very serious business, huh?!

Dave -- Non sequitur? What celebratory lyric would you quote on the occasion of a "no-no?"

Sari -- But Thom and Gracie are still doing the TV, right? A friend of mine just got back from Arizona and said he enjoyed the radio broadcasters -- who weren't Chicago retreads.

Susan -- Jinxing is very serious. You never know what will turn the karma against you.... And kudos to Phillie fans who have taken to Aaron Rowand: He's still very popular here, too.

Patti -- I think the Red Sox are the second favorite team of all little boys my age who grew up White Sox fans. If I'd known about the Utica Blue Sox then I'd probably have been a fan of theirs too. If they were in existence then. Middle Son, though, doesn't like the BoSox -- too much payroll, too much angst. Not that he'd necessarily know what angst meant... but if you explained it to him, I think he'd agree.

It totally passed by me. Just didn't put the words together with the subject. I'll be quiet now.

Actually, Brennamen is in Cincinnati now. Gracie is still here, and New Guy (he will be New Guy all season) is good and actually sounds like Thom.

Thom left to be where his dad is. He was wonderful!

And Greg Schulte does the radio show, he's good also.

In commiseration with Oldest Son: I work with possibly the SECOND biggest Sox fan in the Galaxy. We were both working that night. Brad comes up to my register, all but discharging steam out of his ears. Evidently, he had the radio on in the back room listening to the game, and knew about Buerhle's no-hitter; and since by that time of night I'm the only one in the store to sympathize, I got the woe-laden story, full force. "The first no-hitter in FOREVER and I'm HERE!!!!" *insert a few choice words in there, since there were no customers present at the time*.
Sox Fever, omnipresent...