Riding along on Spaceship Earth: Does anybody know where they keep the life boats?

Today is Arbor Day in the United States. Last Sunday, it was Earth Day.

Go plant a tree. Or at least hug one. 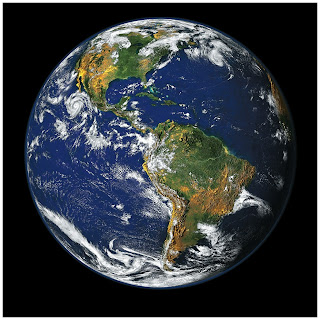 One of the better lessons we learned in the 1960's was that we -- you, me, all of humanity -- are passengers on a fragile blue ball, riding around the heavens beneath a thin canopy of life-giving air. 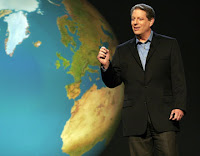 We haven't all drawn the same lessons from this realization.

St. Albert of Gore, for instance (I think he's been promoted), preaches that we need to destroy our economies and give up our cars and all the trappings of modern life. One of his more prominent disciples would order us to use one square of toilet paper "per restroom visit, except, of course, on those pesky occasions where two to three could be required".

And there's no indication that she was kidding.

People like St. Albert and Sister Sheryl believe that we can "stop" global warming by our actions... as if Earth were naturally a static system but for the meddling of humankind.

But it just isn't so.

Now that would change the climate.

And it would probably get us living in caves again, those of us who survived.

Fortunately for all of us the Yellowstone Caldera has not proved as predictable as the Old Faithful Geyser. 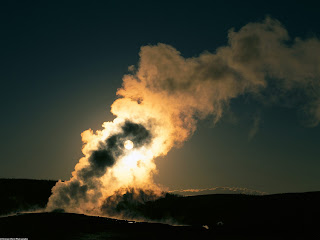 Give or take. And that's just one of the little surprises Mother Nature might have in store for our species. Large meteors have hit our little planet before. A meteor collision may have wiped out the dinosaurs; it almost certainly contributed to their extinction. Who's to say it won't happen again?

So: What's the plan?

If you were riding on a ship in the middle of an ocean, no matter how sturdy the ship looked, no matter how luxuriously it was appointed, no matter how bountiful the midnight buffet -- you'd want to be sure there were enough life boats available. Just in case.

On our fragile blue ball, cruising through the heavens, where are the life boats?

Is there a better reason for a space program? A space colonization program?

Love the Earth. Be a good steward. But realize we may have to abandon ship some day.
Posted by The Curmudgeon at 7:36 PM

Email ThisBlogThis!Share to TwitterShare to FacebookShare to Pinterest
Labels: Final Frontier, Roadkill -- politics in the middle of the road

"And there's no indication that she was kidding."

Curmudgeon also writes:
"People like St. Albert and Sister Sheryl believe that we can "stop" global warming by our actions... as if Earth were naturally a static system but for the meddling of humankind.

But it just isn't so.

So Curmudgeon, am I understanding your post correctly, do you *not* believe global warming is affected by our behavior?

The *Pew Center on Global Climate Change* http://www.pewclimate.org/global-warming-basics/ says:
"The scientific community has reached a strong consensus regarding the science of global climate change. The world is undoubtedly warming. This warming is largely the result of emissions of carbon dioxide and other greenhouse gases from human activities including industrial processes, fossil fuel combustion, and changes in land use, such as deforestation. Continuation of historical trends of greenhouse gas emissions will result in additional warming over the 21st century, with current projections of a global increase of 2.5ºF to 10.4ºF by 2100, with warming in the U.S. expected to be even higher. This warming will have real consequences for the United States and the world, for with that warming will also come additional sea-level rise that will gradually inundate coastal areas, changes in precipitation patterns, increased risk of droughts and floods, threats to biodiversity, and a number of potential challenges for public health."

Do you not believe them to be a credible source?

On the contrary, I think Curm believes it all and warns us to focus on the lifeboat!

Hilda -- Excellent points. No, I'd not seen Ms. Crow's "retraction." Seems rather like Keith Richards' retraction, though, and maybe less convincing. At least Richards could claim he was misquoted by the interviewer -- the evidence against Ms. Crow is her blog.

But climate change -- warming and cooling -- has been a fact of life on Earth since the beginning... and it will continue to be a fact of life long after the only evidence of mankind's tenure on this space-borne pebble is confined to the fossil record.

In the brief lifespan of the human race there've been Ice Ages and Warm Periods -- and scientists really can't know, at this point, how much of the current climate change is caused by humans... and how much is caused by the normal march of Mother Nature. Scientists can better predict tomorrow's weather than they could even a generation ago. But they still can't project out a week with any real degree of accuracy. Why should we believe their projections over the next 50 or 100 years?

I liken the enviro-alarmists of today to the Church fathers of Copernicus' time: They both thought the universe revolved around man.

The universe thinks differently... and we forget that at our peril.

And who or what causes global warming will seem awfully unimportant if the planet becomes uninhabitable because of it... and we've got no place to go....

curmy i think this post is marvelous! great job my friend, sarge is gonna' love this! and will there be chocolate on the lifeboat?

and did you take your vitamin?

Sir Albert of Gore, I love that and will use it in later post with your permission.

What dose the old sarge believe, It is a crock, gore and his cronies have cooked up a huge money making machine while he continues his lavish lifestyle, on our money.

The earth has been through cycles much more severe than the present, 1500 or so years back the temp change was multiples of the present, I wonder if automobiles or toiled paper caused that?

Your post is excellent and I will do a shoutout about it. Thanks

"It is a crock, gore and his cronies have cooked up a huge money making machine while he continues his lavish lifestyle, on our money."

Yeah...OK, I think it's time I bow out gracefully because well...ooops - I almost blew my graceful exit there.

Thanks for your response Curmudgeon.

We all want to book our places on the lifeboats, and not get trampled on in the rush.

Hilda, if I dish it out I can take the backlash, feel free....

Definitely a thought-provoking post as the comments here have shown.

gobal warming will always create dialogue....yes the planet naturally heats and cools but do we need to accelerate the process...I think if we can do something environmentally friendly then why shouldn't we...is it to much to ask to recyle....to use less fuel guzzling vehicles...do we really need a Hummer in the city...and all those huge SUV's are there that many of us that are doing back country travelling? Is there some reason we can't grow environmentally friendly fruits and vegetables.....do we really have to use disposable diapers....can't we make our own baby food like our ancestors did...do we need so many disposable items...what ever happend to baking soda and water and a clean rag....or good old vinegar?

You're my hero, Curmudgeon.

This is one of the most thought-provoking articles on global warming that I've read in weeks. Thank you.

Mr. Curmudgeon,
You are awesome. You seem to take my logic and feelings on stuff and put it in words I couldn't express better. You should run for president - you've got my vote already.

Curmy, you have published a good post. I don't like pollution, who the heck does? Yet due to my wheelchair use, I drive a >5000 lb. full-size van, which the enviros hate due to its "carbon footprint" being too big for their tastes. I want to care, but I can't care to a meaningful degree about "carbon footprints". My huge vehicle allows me to live, and selfishly, maybe, that's more important

Agreed, It's all about the life boats. Humanities options for survival are a little shorter than when Bucky wrote those books.

That thing about the one square of TP...a friend's father use to tell him "you are lucky you do not know what it is like to have to use only one square of TP." It was in reference to living during the Great Depression. Apparently there was a special way they had to fold it for it to have maximum use. I did not ask for a demonstration.