It was the Easter weekend and the family... those that made it home for the holiday... were gathered around... 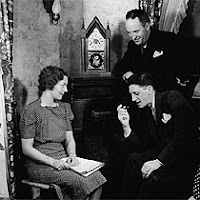 Once upon a time, families gathered 'round the radio. 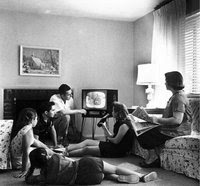 This was one such.

Oldest Son, our soon-to-be college graduate, has lately become enamored of Google home pages. He was showing us all the gizmos and gadgets we could lard into our own home pages... which we could access anywhere from any computer that could reach into the Internet.

There was a certain amount of ooohing and aaahing involved.

And then Oldest Son thought to show us a couple of videos posted on You Tube. His home page has a You Tube search screen added in.

Well, I have been careless. Reckless even. I can't deny it: I have sometimes blogged from home. Usually, I do it from here -- safely cocooned in my Undisclosed Location -- but I fell into the habit during my recent convalescence.

I have tried to be discreet. The younger kids use IE. I use Firefox. Knowing that Oldest Son would be home, I'd 'cleared the private data' from Firefox and deleted all temporary Internet files using Windows.

But this, it turns out, is like putting your vodka bottle in the back of the sock drawer: It's still there. It can still be found. Was this a cry for help?

My You Tube user name -- some permutation of Curmudgeon -- came up on the top line of the screen, right after "Hello."

"What's what?" asked Long Suffering Spouse, looking up from the papers she was grading. She was multitasking -- grading and watching the computer demonstration.

The almost-college-graduate mispronounced "Curmudgeon." Long Suffering Spouse corrected him. "What's that?" he asked again -- and, in his defense, I can only say that he's majored in computer science, not English.

The assembled family members laughed. "That sounds like you," Long Suffering Spouse said.

By this time, Oldest Son had found the videos he wanted to show us... and the moment of danger passed.

For now.
Posted by The Curmudgeon at 8:51 AM

What exactly are you trying to hide?
This blog or dirty stuff you have been looking at on the internet? or both?

whew! you have to be more carefullllor else, your LSS will find out about all the things you write about her...and well, she might fall in love with you all over again:)

My family already knows about my blog weirdness. They don't get it. At all.

Well lets hope he doesn't get curious and Google 'Curmudgeon'.

I panicked and Googled immediately... but #2 is the Comics Curmudgeon -- of whom I've blogged before -- but he's not me....

No, I was safely on the top of page 7 today. What 20-something has the patience to go all the way there?

Thank you for stopping by this morning. I just decided about three hours ago to launch the It's A Boomer Life in its newest incarnation, after I read a news article saying boomers do not blog, or read blogs, (okie dokie I thought). I HAD been casting about wondering what I was going to be blogging about next ...

And yeah you are right, it's only a matter of time before blogging rolls like a safely-stashed bottle of Vodka to the front of the drawer with a thud. Enjoyed the story.

The compliments though, still stand.

Why? Because I talk about my family from time to time. And I'm afraid the kids will say I've embarrassed them. Because too often kids think everything a parent says about them is embarrassing....

I've seen it happen: We have a friend who wrote one of the few worthwhile Christmas letters year in and year out -- sharp, funny, no-holds-barred.

That is, it was until his kids got old enough to know Dad was talking about them to his friends. The Christmas letters ever since have been signed by the dog... and they're just not the same.

Obviously my daughter knows I blog and even write about her but that she knew that from the time I started doing this for the local paper. I try not to embarrass her but considering she embarrasses me from time to time, I figure it's only fair.

Still, a lot of my extended family just doesn't get it even though they read my blog on a regular basis!

And a man does have to have his secrets, doesn't he??

Your secret is safe with me!

My kids think it is so cool that their mother actually knows what blogging is.

Yikes...I hadn't even thought about the repercussions to come when Little Guy is old enough to "find" my blog and get embarrassed by it. Although by then blogs will probably be to archaic to even matter. Glad you're still safely anonymous!

I understand your sentiments. My daugther started the blog for me. She wanted me to know more about blogging. I have to be discreet. No mention of family matters. She links me on hers.

well alrighty then curmy. and everyone knows about my blog, well the one i let them know about anyway, ha ha ha....

I live in fear of a similar scenario every day. This is not helped by the fact that my husband investigates computer crime for a living. In other words, he knows all there is to know about finding out everything you've ever done on the computer since you first set fingers to keyboard.

Not that I have anything to hide, but you know, it's just unsettling knowing someone can glance into your online life like that.

And by the way, glad to see you ducked when almost asking for a favor...good thing cause I would have clocked you for it;)