When a client tells me, "It's a matter of principle," I always counsel caution.

Principles are nice, I answer, but they're awfully expensive.

That looks awful in print, I realize. Some principles are worth fighting for -- even worth dying for. But... in the ordinary course of events... for Charlie Claim Examiner or Paula PI Plaintiff... the kinds of "matters of principle" that come up in the course of private litigation really aren't those fighting-or-dying kinds of principles. But they are expensive. And, when the client's passion cools, and it will, the client will invariably blame the lawyer for allowing the litigation to "get out of hand." And nothing cools a client's passion more and faster than a lawyer's bill for services rendered.

On the other hand -- some things absolutely set me off. 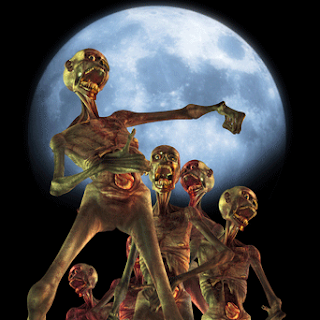 Zombie debt collectors are an example.

Also known as scavenger or junk debt collectors, these bottom-feeders buy debt that others could not collect.

Let's say you fail to pay Mr. Visa this month. Mr. Visa will promptly unleash his battalion of debt collectors on you -- but suppose, for some reason, you still fail to pay. Then the matter will be referred to "collection" -- an outside debt collector -- who will try and collect the debt charging Mr. Visa a fee of up to 50% of the amount collected. If these efforts fail, suit may be filed.

But not always. Sometimes, when people owe a lot of money, they move quickly, under cover of darkness. The debt collector can't find the person who owes the money; suit may never be filed.

The collector can still make money off these uncollected accounts, though, if it sells them to someone lower on the food chain. The entity that buys the debt pays pennies on the dollar because these debts have already proved resistant to collection. But the new collector can seek 100% of the original amount owed (and all the interest and late fees and other junk larded on initially). So the new collector only has to 'hit' on a few of these debts to make the investment pay off handsomely. If the new collector can get a default judgment against the debtor, it can garnish wages and levy property and do all sorts of things that really can squeeze blood from a turnip. Legally.

And the dregs -- the ones that couldn't be found, now twice filtered, are sold again, now for pennies of each dollar that the second buyer paid. In theory, the process can be repeated indefinitely -- at least until the statute of limitation on the debt expires.

That can be a long time. In Illinois, suits on a written contract can be filed up to 10 years after breach.

You think the matter is gone and forgotten... but it keeps coming back. Thus -- zombie debt.

I represented a young lady last year who was sued by one of these collectors. Her father -- a Chicago resident -- was served with process on her behalf. The sheriff doesn't have to put the suit papers into the defendant's hands in order for service to be accomplished. It is enough, at least in Illinois, if the summons and complaint are served on a member of the defendant's household (as long as the person served is above the age of 13).

Problem was, in this case, my lady was not living with her father. She wasn't even living in Illinois. She'd moved, some years back, to England.

My job was to acquaint the court with these facts and obtain an order 'quashing' service. I could do that. (In the process, I learned the English notary seals are much fancier than our homely Illinois version.)

But I had to ask the question of my lady: Were you responsible for this debt?

Sometimes the answer is no: Zombie debt collectors will make astounding leaps of faith in connecting persons they can find to debts they want to collect. A person with a similar name, living in the general area where the deadbeat once lived, may be 'confused' with the actual debtor. It doesn't really matter to the zombie debt collector: If the person sued does not take timely steps to protect him or herself against the suit, the zombie debt collector will get a default judgment.

As the song lyric goes, in time the Rockies may crumble, Gibraltar will tumble -- they're only made of clay -- but default judgments are forever.

But in this case last year, my lady conceded that, yes, she probably did owe some money on this card. She'd moved around a lot over the years, and her mother kept track of the bills and she took care of things with her mother, but her mother took sick and died some years back. This was, she admitted, probably a bill that she'd overlooked.

Well, with that information, I was able to go back to the zombie debt collector's attorney and settle the case on very favorable terms. He really didn't want to try serving her in England. I don't think it's necessary to talk about exact numbers here, and I don't want to betray a confidence even inadvertently, but I think I can safely say that we settled for less than 10 cents on the dollar.

My lady sent me the money; I paid the other attorney. We entered a dismissal order containing very specific release information. I sent a copy of the order to my client with very specific instructions to keep that paper handy. You never know, I warned her, whether -- despite the settlement -- some day some other zombie collector might pop up trying to collect that same debt all over again.

I got a letter today from a new zombie, reciting that he'd bought the debt from the old zombie, the one I'd settled with, and saying that he'd noted that I had represented the lady from whom he was trying to collect the debt and I should darn well better tell her about this.

I spent time instead trying to find out which state agency has jurisdiction over this species of fraud. And I sent a very civil letter to the new zombie saying either he or the old zombie was trying to commit a fraud either against my old client or on the court and, by the way, I was reporting this entire incident to the state. And I have.

Another hour-and-a-half of my life I will never get back -- but it's a matter of principle!
Posted by The Curmudgeon at 11:25 AM

unfortunately sarge has the same name as the duck. it seems the duck incurred some (rather a lot) of charges on his bender and they keep calling us. nothing will make them stop short of payment which i will not do and the duck can't do yet so they call early, they call late, they call and call and call. buggers on them all.

How to reverse boycott debt collectors.

When a debt collector/debt collection/debt buyer company can repeatedly call with the intent of getting money their customers can repeatedly answer or call back with the intent of not giving them any. They need people to pay with as little talk as possible. They don't want to talk with people who know they are never going to pay. Be all talk and no pay. Answer when convenient. Call back. Give no information. Verify nothing. Ask as many questions as you can. Answer none.

Be their bad customer. Make them talk to you fruitlessly for as long as they can stand to or until they stop selecting you as their customer. These companies cannot spend seconds much less minutes on the phone with every person who will never send them a dime. But they don't know who that is. You do. That knowledge is power. Every second you can keep their staff on the phone will render their business less profitable giving them a reason to never call you again.

Calling will not reset your SOL. Making a partial payment will.

One person who does this likes to ask general questions they should but usually won't answer, "May I have the name and address of your agent for service of process?" Calmly and slowly ask them to spell every word in the address. Read it back for verification. Control the pace. If they are rushing then politely ask them to slowly repeat. "Are you a corporation and if so in which state are you incorporated?" Repeat your questions when you don't get direct answers. When they won't answer a question ask, "Would you like to comply with the business and professions codes of your state?" That is usually the point when they hang up on me but if they say they want to comply then begin your questions again.

Repeat while you have the spare time. These folks have many victims and few operators. If everyone calls back but pays nothing the mass auto-dialer business model becomes unprofitable. Don't aid and comfort the enemy by ignoring them. Call! Have a nice long slow friendly chat! Make them hang up first.

There are certainly enough victims to take down debt collectors so ignoring/blocking seems downright Orwellian. Really? We're just going to passively submit and go with a block list or however we manage ignoring an endless stream of unwanted phone calls day after day? No! Unite or remain conquered. Answer/return every call - become well practiced at keeping these folks on the phone - or count yourself not amongst the free.

I don't endorse the above comment, but I guess I can understand and even -- to a degree -- sympathize with it.

If you don't owe the money -- if it's a true zombie collection -- I suppose the collector has arguably forfeited the right to courtesy.

It's just... well, the world is rude enough without deliberately setting out to contribute to the sum total.

The one thing you absolutely should do if you hounded by debt collectors: Consult an attorney. Many local bar associations will provide referrals to clinics or bar groups that can assist you. Consider consulting with a bankruptcy attorney if you owe the money and have no realistic prospects of repayment. At all costs, whether you owe the money or not, do not let a default judgment be entered against you in a collection case. Even if you didn't owe the money before, once a default judgments is entered, you owe it then. And, in all states (as far as I know), after a certain time, default judgments can not be vacated.