It's Washington's Birthday, by George 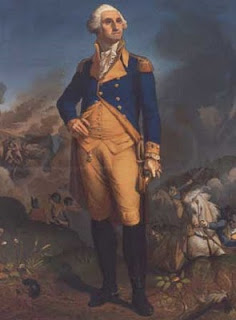 Once hailed as "first in war, first in peace and first in the hearts of his countrymen," Washington has been demoted as part of our national zeal to have as many three day weekends as possible. Once Washington's Birthday was a recognized holiday... now we have "Presidents Day" where Washington must share the spotlight with the likes of Warren G. Harding, James Buchanan, Millard Fillmore, or Chester A. Arthur.

If George Washington had been like other men there might still be a United States of America. It would be a monarchy, of course, or at least it would have been until a second American Revolution.

Washington, like so many of his contemporaries, was steeped in the classics. He and his brother officers knew well the tale of Lucius Quinctius Cincinnatus, who was twice called from retirement to become Dictator of Rome. Cincinnatus left his plow in the field when the Senate came to ask his aid in rescuing the Republic. He attended to the threat and promptly gave up his office -- returning, as legend has it, to the plow, still waiting for him in the field where he had left it.

You can look up Cincinnatus and find that he wasn't entirely admirable, by our standards: His political career was devoted to the suppression of the ambitions of Rome's plebeian class. If you're having trouble remembering what plebeians are, let me help you: You and I are almost certainly plebeians. I certainly was not born into the nobility.

George Washington's voluntary relinquishment of the presidency after two terms -- though he surely could have had a third if he'd wished it -- set a precedent that remained inviolate until Franklin D. Roosevelt ran for a third term in 1940. The two term limit was later written into the Constitution by the 22nd Amendment in 1947.

Washington was keenly aware that he was setting the tone for all the others who would come after him, whether they would be judged lesser or greater by the wise men of History. He said, "I walk on untrodden ground. There is scarcely any part of my conduct which may not hereafter be drawn into precedent."

And the most important precedent he set was stepping aside. "I had rather be on my farm than be emperor of the world," he said -- just like Cincinnatus. Washington said these things -- just as so many other, lesser mortals in so many other countries have said similar things since. But Washington followed through. His attitude, thankfully, became embedded in the American psyche.

Supposedly Sarah Palin became flummoxed recently when asked, in a Fox TV interview, which of the Founding Fathers was her favorite. According to the story I read, she eventually stammered out, "All of them?"

Of course, it was a trick question.

The first response must be -- must always be -- "Do you mean who's my favorite... other than George Washington?"

And today is Washington's Birthday: He was born on February 11, 1732. Before you start looking at your calendar, remember that, when George was born, the British Empire had yet to adopt the Gregorian calendar. (It finally did so in 1752 -- and, by then, to catch up with everyone else, 11 days had to be added on to the current date. Many people thought 11 days had been stolen from their lives -- though Wikipedia disputes this.) Anyway, Washington's Birthday became February 22. Happy Birthday, George.
Posted by The Curmudgeon at 9:44 AM