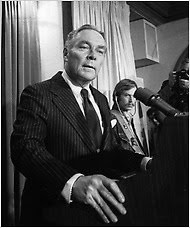 It was March 30, 1981, and Ronald Reagan had been shot. Maybe Regan was joking with his doctors ("I hope you're all Republicans") or trying to allay his wife's fears with a quip ("Honey, I forgot to duck") -- but American Presidents had, until that point, a notoriously bad record of surviving gunshot wounds.

At a White House press conference, Haig told the world, "I am in control here." It was a statement that has been the first thing recalled in every reminiscence of the man that I have seen. Reagan's Vice President, Bush the Elder, was out of town at the time of the shooting. Haig said he was in control until the Vice President returned.

As a matter of law, Haig was dead wrong, of course. The line of presidential succession runs from the Vice President to the Speaker of the House to the President pro tempore of the Senate before it reaches the Secretary of State -- but Haig wasn't talking to constitutional law professors. He was speaking to the world -- and, in particular, those in the world who might see the assassination attempt as an opportunity for mischief. If he had used a more collegial "we" he might eventually have been elected president in his own right. Instead, his 1988 campaign folded before the New Hampshire primary.

The NYT obituary notes that Haig was effectively POTUS in the last days of the Nixon Administration. There is no doubt that Haig eased Nixon out in August 1974. The obituary recounts that Haig discussed the possibility of a pardon for Nixon with Gerald Ford on August 1, 1974. Although the Times doesn't mention it, I recall that Haig -- a career military officer, rising to Vice Chief of Staff of the Army before being called back to the White House as Nixon's Chief of Staff -- also passed word to the Army during those frightening days that any White House requests for military assistance of any sort would need to come strictly through the chain of command.

I don't know that a coup was in the offing in August 1974. I doubt Nixon could have mustered the will to try. But there was probably a danger of some ambitious person making a play and using Nixon for that purpose. Actually, if Haig were deserving of the scorn heaped upon him in 1981 for his "I am in control" comments, it's a wonder that he didn't try and take over in 1974.

But he didn't. And, more important, he made it virtually impossible for anyone to try. That alone makes Haig a hero in my eyes. If he really persuaded Ford to issue Nixon's pardon, that only makes Haig more secure in the pantheon of great American heroes, at least in my view. (Sure, I know a lot of people who wanted Nixon strung up from the nearest lamppost -- but what would that have done to the country?)

Funeral arrangements for General Haig are pending. A Mass is being planned at Fort Myers and interment at Arlington National Cemetery but both must wait a couple of weeks, according to Haig's brother Frank, a Jesuit priest, "due to the wars in Afghanistan and Iraq."

Who says bloggers never consider both sides of a question? Of course, Hitchens' analysis is locked into 1981... and my impressions were formed in 1974. One of us may be wrong -- or, since we are talking about the same man but looking at him at two different times in his life, we may both have a point. This is why history is interesting, don't you think?
Posted by The Curmudgeon at 10:22 AM

Email ThisBlogThis!Share to TwitterShare to FacebookShare to Pinterest
Labels: History, News and Views