An evening at home with (most of) the Curmudgeon family 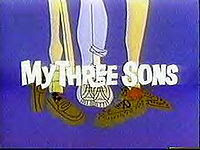 My three sons (cue theme song) were reunited Saturday evening at the Curmudgeon manse in celebration of Youngest Son's 17th birthday. (Younger Daughter was visiting her sister in Indianapolis.)

Oldest and Middle Sons had talked about taking their brother out for wings until Long Suffering Spouse advised that she'd laid in some Italian Beef in case they decided to come for dinner. That disclosure decided them, all right; all that needed deciding then was when they would arrive.

Youngest Son had been weightlifting with the football team first thing Saturday morning; he went comatose on the den couch after snarfing down some bacon and scrambled eggs upon his return. When the incessant beeping of his cell phone was able to penetrate his sleeping consciousness, he discovered that a lot of the kids from the baseball team would be out playing laser tag that evening. He wished to join them.

Youngest Son's actual birthday was yesterday, not Saturday, but he'd already informed us that he wouldn't be available then: A major league strength and conditioning coach was coming over to school Sunday morning to offer pointers to the baseball players. And we -- his very mean and heartless parents -- are requiring him to take an ACT review course on Sunday afternoons. Thus, there would be only a small window of opportunity in which to acknowledge our youngest's natal day; it would have to be done early Saturday evening.

Oldest Son was the first to arrive. He actually took the train this time and walked from the station. He informed us that Middle Son had gone home after work (he's working every Saturday during tax season) to take a nap. There soon arose some question about whether Middle Son would return to a waking state before Youngest Son went off to shoot lasers at his baseball teammates. Since food was involved, Middle Son found the strength to join us in a timely manner.

Meanwhile, Long Suffering Spouse, as-ever prepared for any eventuality, had a cake already made. She was decorating it while calling her mother to come over and join the impromptu celebration.

So the Rockwell-esque tableau in the living room of the Curmudgeon home early Saturday evening: I and my three boys on one side of the room, my spouse and her mother on the other. When Middle Son ate a salad his mother prepared, Long Suffering Spouse and Abuela clucked appreciatively. When the boys' conversation descended into the mean-spirited or tasteless, Long Suffering Spouse would deflect Abuela's attention. Food was consumed in large quantities.

The cake was produced with the requisite number of candles -- most of them of the trick variety, meaning that they spark and reignite when one attempts to blow them out in the usual manner. This gave Youngest Son's brothers all sorts of opportunity to give him grief about his inadequate conditioning.

Long Suffering Spouse gave Oldest Son a cup of water in which to douse the trick candles. But Youngest Son, determined to triumph over the stubborn candles, kept blowing them out... and 're-blowing'... and 're-blowing.' One candle in particular was particularly stubborn. I asked Long Suffering Spouse to take note of the location of that candle on the cake and to please not give me a piece cut from anywhere near that candle.

Later, Oldest Son picked up a newspaper from the coffee table. He feigned shock. He looked at the paper again, then pulled out his elaborate cell phone (a Raspberry or Beri-Beri or something like that) and looked at that... then back at the paper.

It was at this point that I plaintively asked Long Suffering Spouse why she had to give me smart-aleck sons.
Posted by The Curmudgeon at 8:33 AM

i really enjoyed this post. it was about cake. i mean about your family and that is lovely curmy.

My youngest son is 17 too and looking forward to learning how to drive now. Those candles sound fun, I wish I had thought of using them.

good to hear about your clan!