As much as a foot of snow is predicted in Chicago between today and tonight -- not much, perhaps, by comparison to what they've gone through a couple of times this winter in the District of Columbia, Northern Virginia, etc. -- but bad enough. We don't usually get big snows in February here. In my lifetime, the truly memorable snow events have been in January. 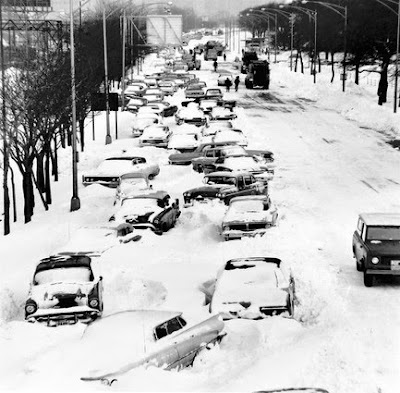 There was the Blizzard of '67, of course (see above) and the one in '79. We had a pretty good snow on Valentine's Day in 1990, when 8-12 inches of snow fell. I remember walking home from the train that night along the frontage road of the Kennedy Expressway. What I remember most was the silence. No cars were moving below. A lot of plans got canceled that night.

But, as I said, that was the exception, not the rule -- so today's snow -- if what is predicted actually materializes -- will be one for the books. (I'm told the Vegas line on the total accumulation over/under is three inches. They're very cynical in Vegas. And here: I'm betting on the under myself.)

Long Suffering Spouse, though, is hoping that the weather prognosticators have badly underestimated the strength of today's storm. She could do, she tells me, with a snow day.

Imagine: A teacher who longs for a snow day. Wouldn't you have thought that impossible when you were a kid?

When I was a kid I longed for snow days. (I got a couple of them, too, in 1967.) In high school I longed to get trapped at school. But, unlike my children, I went to a co-ed public high school.

There's no romance in big snowfalls for grownups... not unless its so big that the world shuts down for a spell. And, even then, we'd have to dig out eventually. Mostly a snow like this is just big enough to be unpleasant -- and not big enough to provide an excuse for staying home.

There's one factor that might help make this snow a truly big event: Long Suffering Spouse and I have doctors' appointments this afternoon in the suburbs. The Universe may punish me for my bad attitude. Others may suffer along with me.

There's a lot of snow swirling past the windows here at the Undisclosed Location right now. This high up, it's very pretty. On the street, though, it quickly turns to gray slush. And so we soldier on....
Posted by The Curmudgeon at 9:56 AM

i remember lots of big snowstorms growing up in baltimore but here in west palm beach? not so much. today is sunny and 80. and there is cake in my house. perfect day.