On the morning after the Illinois primary: Thinking about things too many of us take for granted 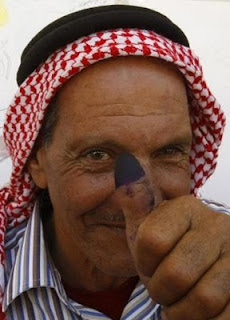 The fellow on the left voted in an election last year in Lebanon (source). In several countries it is the practice to mark ballot applications with a thumbprint; this can cut down on electoral fraud -- and provide conclusive proof of who voted in any given election.

In parts of some countries in the Middle East -- Afghanistan, most recently -- being caught with an ink-stained thumb can constitute grounds for summary execution.

What we so politely call 'insurgents' or 'extremists' here in the West don't merely boycott elections; they kill people who don't.

Can you imagine having to take your life in your hands for the opportunity to influence, in the smallest of ways, the future of your country?

We had a primary yesterday in Illinois. Most people (roughly three out of four) stayed home. People were turned off by negative attack ads, pundits theorized. It snowed a little, too, others noted. The primary is too early (it used to be in March). People are squeamish about having to declare a party when you get to the polls (in Illinois, in the primary, one must ask for a Democratic, Republican or Green Party ballot).

People in Illinois who could have voted yesterday but who did not should be embarrassed and ashamed of themselves.

A woman came up to Benjamin Franklin as he was leaving a closing session of the Constitutional Convention. "Well, Doctor," she asked him, "what have we got -- a Republic or a Monarchy?" Franklin replied, "A Republic, if you can keep it."

On mornings like this, I can't help but wonder a little if we still can.

So many, in such God-forsaken parts of the world, would sacrifice anything for the American Dream. And 75% of our registered voters can't even be bothered to vote.
Posted by The Curmudgeon at 11:23 AM

i am proud to say i always vote. always. sometimes i have to do it by mail but i do it. i am happy about it too!

Vote is essential in Britain as well

Unforunately, the words of your post are true -very sad, but yes, also very true. Another excuse often given about not voting in the primary is that "it doesn't really count anyway." However, it is from the primary that we decide who will be the candidate that will actually be in the running come November and isn't that then a VERY important part of the election? The representative to our State House here from our district frequently runs for re-election with no opposition in November because no one dares -or can afford -to run against him. And when he does have an opponent, those who do the bulk of the bitching about this guy, can't be bothered to show up at the polls then to vote at all! Absurd, isn't it -such a wonderful right and privilege we have in this country and so many who ignore it completely.

My husband once told me that we should not vote on a certain Presidential election because we were going to cancel each others vote. Well, he was right in that regard. But, there were a lot of other issues to also vote on, that we were in total agreement of.

In fact, that year, (for President race) one half of our yard had signs for one candidate and the other half had them for the other candidate.

There is really no excuse for not voting. If you don't vote then you should not be able to voice your concerns over Govt. issues. Many times it is the very ones who don't bother to vote who complain the loudest.