Another generation will pass away -- at least -- before more Americans walk where Buzz Aldrin once briefly trod.

That's the intended consequence of President Obama's proposed cuts in NASA's budget. According to Joel Achenbach's February 1 article in the Washington Post, "the administration effectively plans to kill the Constellation program that called for a return to the moon by 2020. The budget, expected to increase slightly over the current $18.7 billion, is also a death knell for the Ares 1 rocket, NASA's planned successor to the space shuttle."

Budget proposals are sometimes overridden: In a recession Congress gets mighty testy about cutting back programs that will cost jobs in the districts of powerful members. That's the response focused on by the AP's Jay Reeves in this article, from today's Chicago Tribune.

Stopping development on Ares not only means losing jobs in the near future; it means that the billions that NASA has already spent on the project were wasted.

The Washington Post says that the Obama budget "will call for spending $6 billion over five years to develop a commercial spacecraft that could taxi astronauts into low Earth orbit. Going commercial with a human crew would represent a dramatic change in the way NASA does business. Instead of NASA owning the spacecraft and overseeing every nut and bolt of its design and construction, a private company would design and build the spacecraft with NASA looking over its shoulder." In this vision, NASA would evolve into an FAA and/or an NTSB for rocketships.

As visions go, this is a pretty good one. But... is it overly optimistic on the basis of today's technology?

That depends, apparently, on whether you're a candidate for the proposed "seed money" that the Feds may sprinkle over aspiring aerospace contractors. Former NASA administrator Michael Griffin is quoted in Achenbach's article as saying, "One day it will be like commercial airline travel, just not yet.... It's like 1920. Lindbergh hasn't flown the Atlantic, and they're trying to sell 747s to Pan Am." Griffin is opposed to abandoning NASA's return to the moon. But, Achenbach writes, "John Gedmark, executive director of the Commercial Spaceflight Federation, said the critics underestimate the maturity of the commercial sector." But Mr. Gedmark represents the folks who would be the beneficiaries of federal largesse.

My own opinion is that we're still in the Lewis and Clark stage of spaceflight: Right now, we are trudging through the wilderness, looking but not staying. When we set up permanent installations, like frontier forts, in orbit and beyond, commercial enterprises will scramble to set up trading posts... and tourism... and manufacturing.... The Russians are already bringing the occasional tourist to the International Space Station.

But America had better wake up to the fact that if we don't claim the high ground of outer space, others will.

And we may not be real pleased with who we see up on the hills when we wake up one morning. 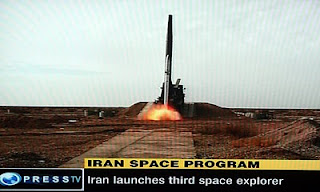 Case in point: Iran launched another rocket yesterday, this one carrying animals, according to an article yesterday by Adam Gambett in the Guardian. The British newspaper article notes that the Iranians also launched a satellite into orbit last year on February 3, the 30th anniversary of the 1979 revolution. (See, linked Guardian article from February 3, 2009.)

Yesterday's flight was apparently sub-orbital (the capsule containing the small animal passengers was allegedly returned safely to Earth). But if Iran can put a satellite into orbit, it can also put a warhead on the surface. Anywhere on the surface.

America was very careful, in the Cold War era, not to goad the Soviets into militarizing outer space. Our astronauts generally were career military officers -- but we were careful to stress the civilian control of NASA and our peaceful intentions in reaching for the stars. The Soviets may have been unpleasant, but they weren't crazy: They knew we could militarize space if they did, so they didn't either.

Meanwhile, in Iran, President Mahmoud Ahmadinejad launches satellites and tries to build nuclear weapons. And he's crazy as a loon. The Soviets -- as logical atheists who didn't believe in a next world -- were understandably chary about blowing up this one. Ahmadinejad, though, has a well-known "penchant for Shia eschatology," repeatedly claiming "to be personally guided by the Mahdi, the prophesised messiah of Islam." (Quotes from this essay, posted on Al Jazeera.) The Mahdi is the 12th, or "Hidden" Imam, who, though born in 868 A.D., is still living and will return at the End of Days (with Jesus, by the way) to establish justice in the world.

Do you think Mahmoud Ahmadinejad will show any restraint... if gets the opportunity... about militarizing space?

We don't have to launch orbital nuclear platforms to stop Ahmadinejad. We don't need lasers or bombs. We just have to be there first. We have to hold the high ground.
Posted by The Curmudgeon at 8:46 AM

It is depressing, but it's kind of hard to counter the argument that you need to spend money on people on the ground before you spend it in space. I see your deficit has nearly hit $15trillion? Why bother counting any more?

I do despair for the future sometimes. I wouldn't worry too much about Iran's space program though I have a feeling they'd turn Iran into an ashtray before letting him launch anything like that.