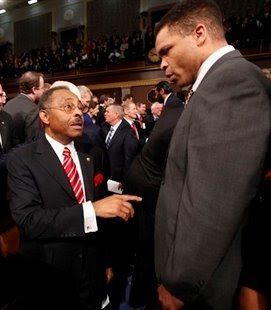 They're all after Senator Roland Burris to resign now -- the Chicago newspapers, civic groups, most of his fellow Democratic pols -- now that it has been revealed that Mr. Burris' ties with the now-impeached Governor Blagojevich were more extensive than originally admitted. The Senate Ethics Committee is investigating and Mr. Burris' testimony before the Illinois House Impeachment Committee has been referred to the Sangamon County State's Attorney for a perjury investigation.

I'm not so sure I want to join the chorus for Burris' resignation. Let me explain.

This week we learned that, back in September, long before he got his own Senate appointment, Burris wrangled a big state job for his son, Roland II. New Governor Pat Quinn is demanding an investigation into how Burris fils landed his job as senior counsel at the Illinois Housing Development Authority. (At the time he got the gig, young Mr. Burris' home was in foreclosure and he was looking down the barrel of a $34,163 federal tax lien. It's amazing how good jobs become available for connected people just when they're needed most... but that's a story for a different day.)

The picture at the top of the page shows Roland Burris conferring with an Illinois congressman before President Obama's Tuesday night address to a joint session of Congress.

The congressman in the picture is Jesse Jackson, Jr. -- or Senate Candidate 5, as he is known in the FBI Affidavit that accompanied the initial criminal complaint against Blagojevich. According to some stories, Jackson was reportedly willing to raise a million bucks for Blagojevich in return for the appointment. There are other reports that persons who would have organized and contributed to the fundraising for Rep. Jackson are singing to the Feds. I do not pretend to know if this may be so.

The most that Blagojevich apparently asked of Burris was that he come up with $10,000 -- and Burris didn't even raise that. And yet Burris not only got Obama's seat for himself, he got a plum job for his kid besides.

Thus, perhaps a reappraisal of Mr. Burris is order: If he can get results even half as good for the people of Illinois as he seems to have gotten for himself, he should not only not resign, he should be elected in his own right in 2010.

You've lost me! It's all very confusing.

the whole thing is making my head spin around...