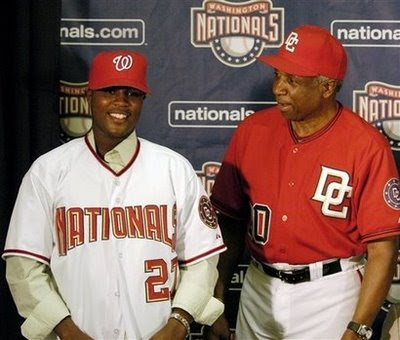 Dominican shortstop prospect Esmailyn “Smiley” Gonzalez was signed as a 16 year old by the Washington Nationals in July 2006. That's young Mr. Gonzalez pictured above, in 2006, standing next to then-manager Frank Robinson.

Except, it turns out, Mr. Gonzalez was not as young as he claimed.

Duh, you say, and I might join you in that. Just this morning, on the train, I read an article by Chris De Luca in the Sun-Times about Jose Contreras' remarkable recovery from an injury last season that was believed to be career threatening... particularly for a man his age. Mr. Contreras had a long and successful career in Cuba before making his way to the United States. How long? Some people, unkind people, say Contreras and Fidel Castro used to pitch together in high school.

I remember when Contreras was injured, last August. I saw him sprawled out on the ground and I remember thinking -- oh no, I hope it's not a hip injury. Hip injuries are tough on old people.

And, yet, this morning, Mr. De Luca gives Contreras' age as 37. 37? Mr. Contreras wears a number 52 on the back of his White Sox uniform -- and most people would guess that's nearer his age, give or take, than 37.

The only people who shave more years off their age than Latin ballplayers are Hollywood actresses.

So I had to wonder why the story of the not-so-young Mr. Gonzalez would rate such a big play this morning on Yahoo! Sports. (The link is to Howard Fendrich's story for the AP; the photo accompanying this post was obtained from that site as well.)

Well, it turns out, Mr. Gonzalez was not only not 16 when he was signed, he wasn't even Mr. Gonzalez. His real name is Carlos David Alvarez Lugo. He's really 23 now, four full years older than the Nationals thought. But what makes this story really newsworthy is that the deception has apparently been documented.

However -- whatever this guy's name really is -- he did hit .343 in the rookie-level Gulf Coast League last season. He was the league's MVP. You'd think that would count for something. And it probably will... when the dust settles. Even Nationals President Stan Kasten, who's crying fraud about the revelations, is quoted in Fendrich's article as saying, "I would say clearly he [Gonzalez a/k/a Lugo] remains a prospect — but I would say a very different kind of prospect — today."

If Gonzalez/Lugo is traded for just one individual, will that be considered a 2 for 1 deal?
Posted by The Curmudgeon at 11:46 AM

The age does look a little unsure there!

I'm not sure who said it last year, it could have been Tim McCarver or possibly the "Hawk" (and yes I do watch Sox games).

The statement was that Contreras was the Jack Benny of Baseball.