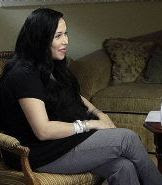 It seemed like such a miraculous, happy story at first -- octuplets, born alive, all apparently likely to survive.

With the mother's identity initially shrouded in secrecy, we filled in the blanks in our imaginations... a married couple, we assumed, anguishing over infertility issues, joyous at the news of a long-awaited pregnancy, overwhelmed by the number of babies.

I sure didn't imagine Nadya Suleman, 33 years old, unmarried, with six kids already, and on food stamps. I haven't watched the full interviews she's given; I've only seen clips. Perhaps the clips are designed to make her look and sound particularly creepy. Perhaps that's how she really is.

But she couldn't imagine discarding healthy embryos started in a fertility lab -- so she took the risk, to herself and to her unborn babies, of taking them all.

But why was she seeking fertility treatments in the first place?

Meanwhile, this week's Newsweek carries this column by Anna Quindlen (reprinted today in the Chicago Sun-Times) about the abortion pill. Take a pill. Stop a baby.

It grieves me that a supposedly enlightened, progressive society can take such a cavalier attitude about destroying unborn children. Ms. Quindlen would argue that the abortion pill is taken very early in a pregnancy, while the fetus is still largely undeveloped. If you took a survey, you'd probably find that most people -- however squeamish they are about abortion -- would support a woman's right to use an abortion pill in the earliest weeks of an unplanned pregnancy.

But what would our survey respondents say about the horror recounted in The Barbershop: Dennis Byrne, proprietor: Still waiting for a plausible explanation? (Byrne's blog post recently ran in the Chicago Tribune. Please take a moment and read it.)

I think most people would be appalled. They would say that what happened to the Williams baby was unspeakably wrong. It was murder, nothing less.

You see, most people can find clear ethical positions in extreme cases. The aborted Williams baby, born alive and hidden on the 'clinic' roof, there to rot away in the semi-tropical Florida sun. The irresponsibility of Nadya Suleman and those who catered to her whim to have a huge family she could not hope to support.

It is said that 'hard cases make bad law.' But what are 'hard cases'? Not the cases of Ms. Suleman or the case of a baby born alive at -- and left to die on the roof of -- a Florida abortion clinic. These are easy cases. We can readily identify the 'bad guys.' No, hard cases are ones where both sides have good points, where any result, no matter how painstakingly arrived at, will injure someone who arguably should not be injured.

Can these extreme cases can help us discern shared ethical principals so we can work backward to the 'hard cases' and apply them? Or would that be too awkward?
Posted by The Curmudgeon at 9:28 AM

I think any part of the questions you raised are awkward, but as in previous posts, I applaud your willingness to put hard questions out there.

The best approach is to avoid getting pregnant in the first place. OK that one's easy, but what if? I think we have to accept termination as an option, but we also have to recognize that it is never a good option.

Who paid for her fertility treatments? Who is supporting her kids? Oh, now you have got me really curious but I must not dawdle on the internet.