Fearless election prediction: Obama will win... and his adoring press will begin to fade

Of course, anyone who's followed my periodic baseball playoff predictions will know not to plunk any money down in Vegas based on this prediction. Indeed, given my track record, my prediction of an Obama victory may provide aid and comfort to the McCain camp.

But I do think Mr. Obama will win because he has become a symbol. He has become a symbol of how far America has come on race. Many people in America, and particularly in the media, are enamored of the concept of a “black president.” As the first black candidate to attract significant support across racial lines, Mr. Obama has been embraced... but the media will soon remember that he is only a man after he is elected. 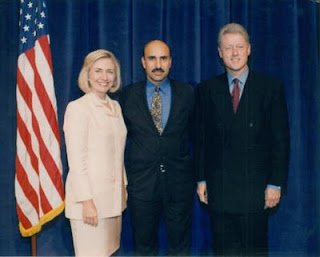 And when the media starts considering Obama the man, as opposed to Obama the symbol, my hunch is that they will finally begin exploring Mr. Obama's Tony Rezko connection in earnest. Hillary Clinton tried to encourage the media on this topic during the primaries... and got nowhere. This posed picture of then-President and Mrs. Clinton with Tony Rezko was widely circulated as an effective countermeasure.

Recently, it is suggested, Mr. Rezko has been singing like a canary to Federal prosecutors. A long stretch in the Chicago Metropolitan Correctional Center can apparently do wonders for one’s singing voice. And Mr. Rezko’s performance has been deemed sufficient, apparently, that his sentencing — which was supposed to take place last week — has been postponed.

The first fruits of Mr. Rezko’s cooperation may be found in last week’s indictment of Springfield power broker William Cellini. Cellini was nominally a Republican, but his indictment stems from his fund raising efforts on behalf of Democratic Governor Rod Blagojevich. Quoting the U.S. Attorney’s press release announcing the indictment: Cellini is charged with “conspiring with others to force Capri Capital, also a real estate investment firm, and Thomas Rosenberg, a principal and part owner of Capri, to raise or donate substantial political contributions for” Governor Blagojevich.

Blagojevich and Obama have little in common, other than that they’re both Illinois Democrats. That, and Tony Rezko took an active interest in their careers.

It's difficult to explain, to outsiders, just how corrupt Illinois politics can be. Why, only last week, the $200,000 a year director of the Lincoln Library was fired… because of shoplifting charges. Even our scholars are crooked.

In Wednesday's Chicago Sun-Times — a paper which has enthusiastically endorsed Mr. Obama -- the Watchdogs column reported on Obama’s friendship with Dr. Eric Whitaker, who reportedly is in line for a big Washington job in an Obama administration.

But there was scandal, too: Whitaker “oversaw the budget of the Illinois Health Facilities Planning Board, which approves medical construction projects. Rezko and his associates controlled that board, which they used to solicit kickbacks and payoffs, according to testimony at Rezko’s trial.”

Whitaker is no longer a state employee. “Whitaker left the state payroll a year ago and joined Obama’s wife Michelle as a high-ranking executive at the University of Chicago Medical Center. When he was hired, U. of C. was seeking permission to expand its children’s hospital — one of five expansions the university sought from the state while Whitaker was health director. All were approved by the planning board. Whitaker and the U. of C. said he had nothing to do with those approvals.”

These kinds of amazing coincidences happen all the time in Illinois. And Whitaker has not been charged with any wrongdoing.

Two of Whitaker’s key staff people have gotten unhappy press recently as well. Whitaker’s former chief of staff, Quin Golden, moved to the University of Chicago in January — but she stayed on the state payroll until July. She was asked to be a consultant during the transition. So, while drawing a check from the university, she also received $72,000 from the state “– including $28,000 for the consulting work and $10,441 for unused vacation.”

Then there was Roxanne Jackson, Whitaker’s HR director at IDPH. While pulling down $100,000 a year in this state job, Jackson found time to practice law on the side. She left the state job in October 2004… and declared bankruptcy just a few days later. She didn’t tell the Bankruptcy Court about her state job, only her private law practice.

And while her bankruptcy was still pending, she picked up a new client. Can you guess who?

Oh, and there’s the millions of dollars in contracts that Jackson, as an attorney, won for private clients... with the aforementioned IDPH.

The thing with Mr. Obama is that he’s come up through this system. He came up very fast. He may not have been in the system long enough to have been tainted.

But some of the people that Mr. Obama will want to bring with him to Washington are likely to be very tainted indeed. After he is elected, Mr. Obama may find that he is receiving uncomfortable scrutiny as a result of some of his Illinois associations.
Posted by The Curmudgeon at 12:16 PM

Oh, Cur, once Obama is in office, he may wish for second prize. He is gonna have his hands full of so many hot potatoes, not least of all the deals he made to get there. It is going to be a hard time for US and Obama. Even so I would much prefer to have him in the office--hot potatoes and all--than the alternative.

scary isn't it? it sounds like an onion, layer after layer of corruption...