Had you stopped by this page earlier today and seen that there were no new posts, you may have thought that I was still recovering from yesterday's magnum opus.

Suffering, perhaps, from carpal tunnel syndrome or something.

I was as anxious to post new material as you were to read it. (OK, I was more anxious. Much, much more anxious.)

But when I went to fire up the old computer... I could not get on line. 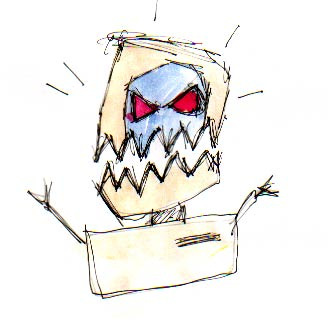 And I was alone. My two colleagues with whom I share space here at the Undisclosed Location are out today. Neither our tenant nor his computer-savvy paralegal were here either. We have a secretary who comes in once a week for a couple of hours; she'd already been here this week.

So I was thrown back on my own resources. Which is different than being thrown on my back. In the first case there's no padding at all; in the latter case, there's far too much.

I tried the usual things... restarting the program... trying IE instead of Firefox... restarting the computer. I got nothing for my efforts except a growing frustration. I tried the secretary's machine to see if, perhaps, it had access, which would at least confirm that the problem was in my own machine. But, alas, I lacked the password to get in.

But I remembered that one can sometimes make the genie come out of the bottle again by turning off and then turning on the cable modem box. We seem to have two boxes performing a similar function. Sandwiched between them is another box into which all sorts of telephone-type wires are connected. To be safe, I turned them both off.

I waited some more.

Then I turned them back on... and kept waiting... really. Finally, I went back to my machine... and got what the little boy shot at. (Think about it; you'll get it.)

One time, I remembered, the DSL provider shut off our service. Something about an overdue bill.... So I went in search of our suite checkbook and the paid bills. It looked like were up do date. Therefore I could call the DSL provider in a state of high dudgeon.

My state of self-righteous indignation evaporated whilst I was languishing in phone menu hell. The always helpful, slightly apologetic-sounding machine voice cautioned me that, in the unlikely event I reached a living, breathing human, I would need my account number (which I had) and the answer to my security question (which completely stumped me). Eventually, though, the nice lady who finally took my call was willing to overlook my lack of an answer to the security question and tell me that she could ping my modem and it was working fine.

This, even though we'd never properly been introduced!

I tried turning off the modem box and the other box... again... and achieved no detectable improvement.

Now, in the corner of our storage and coat closet sits an antiquated server cocooned in a web of cords and plugs and wires. Two of our attorneys here, the one who passed away and one of the ones who didn't, were networked at one time, and they were both networked with the machine in the secretarial station. I nudged the mouse and woke up the screen and saw this error message:

WINDOWS - SYSTEM ERROR
The system has detected an IP address conflict with another system on the network. Network operations may be disrupted as a result. More details are available in the system event log. Consult your network administrator immediately to resolve the conflict.

There were a couple of problems here. I wouldn't know where to begin looking for the system event log (as if the details would help me in some way) and, as far as I know, we don't have a network administrator. Today we had only me.

I called Oldest Son. He's in the business; perhaps he could give me some pointers. In the meantime, I'd gotten hold of our part-time secretary. She gave me the password so I could try accessing the Internet from that machine. Her machine was still booting when Oldest Son called me back.

I explained to him what I'd done. He said restarting the modem should resolve the IP address conflict. It just takes a little time sometimes. The secretary's machine finished booting. I tried launching IE from her machine. Oldest Son chanted some and told me he was sprinkling his desk with magic dust. I think I heard a rattle.

The Internet came on.

And it's on my machine too. Oldest Son he'd send a bill.

I have been there before. As regrettable as it is, when all else fails you must call someone that knows more than you do.

I feel your pain. Glad you're online again.

As long as you are back on the Internet, life is good.

(I am too tired to read - and comprehend - the whole post about the Quindlen column, sorry)

have a good weekend, Mr. Curmudge!

Ah yes, the old reset the modem routine. Been there, done that, cursed the Gods of the Internet in the interim!

Glad to hear you're back up and running and if this ever happens again, at least now you know what do and won't have to call in back-up!

curmy i got pinged once myself. it wasn't nearly as much fun as i thought it would be though.