A civil rights struggle that is either almost over or which hasn't yet started, depending on your point of view

Third in a series of essays that began with this post on Wednesday. 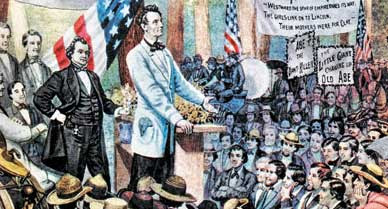 Fergus M. Bordewich wrote about Lincoln-Douglas Debates in the September 2008 issue of the Smithsonian magazine. (These were debates between Mr. Lincoln and an earlier Democratic presidential candidate from the City of Chicago -- but these debates occurred in 1858, not in 1860, when they were running against each other for the U.S. Senate. Douglas won the contest in 1858.)

The debate then was over slavery and particularly over the expansion of slavery. Douglas and the Democrats were focused on the legality of the practice. Lincoln conceded the legality of slavery, but questioned its morality. Bordewich supplies this excerpt from the debate at Knox College, in Galesburg, to illustrate the point:

"I suppose that the real difference between Judge Douglas and his friends, and the Republicans on the contrary, is that the Judge is not in favor of making any difference between slavery and liberty...and consequently every sentiment he utters discards the idea that there is any wrong in slavery," Lincoln said. "Judge Douglas declares that if any community want slavery, they have a right to have it. He can say that, logically, if he says that there is no wrong in slavery; but if you admit that there is a wrong in it, he cannot logically say that anybody has a right to do wrong."

He quotes Lincoln from the last of the debates, at Alton:

"It should be treated as a wrong, and one of the methods of...treating it as a wrong is to make provision that it shall grow no larger," he declared, his high-pitched voice growing shrill.

In the present day, of course, the battle between 'pro-choicers' and 'pro-lifers' is not sectional, although more of the former are found in cities and more of the latter seem to be of rural origin. The analogy is not perfect.

No historical analogy is.

But, as with slavery, and particularly the territorial expansion of slavery (Dred Scott), the current extent of abortion rights is contingent on the survival of a dubious Supreme Court precedent.

Even lawyers who strongly support abortion rights do not hold up Roe v. Wade, 410 U.S. 113 (1973), as a good example of constitutional analysis. And the 'scientific' underpinnings of Roe are increasingly suspect. Years ago Sandra Day O'Connor famously observed that Roe v. Wade was on a collision course with itself. City of Akron v. Akron Center for Reproductive Health, Inc., 462 U.S. 416, 458 (1983) (O'Connor, J., dissenting). That collision is underway every day in neonatal intensive care centers around the country. Democratic litmus testers in Congress haven't demanded fealty to the forced reasoning of Roe v. Wade but to the important principle of stare decisis.

Every rational person will have to admit that at some point in its gestation, a fetus becomes, for nearly all intents and purposes, a human person. At some point, even before its time, that fetus can be torn from its mother's womb and survive independently. At ever earlier points, that fetus can be born and look forward to survival and to eventual robust health, the same as any full-term baby, albeit with the miraculous help of modern medicine.

But -- because in a lawsuit there must be winners and losers -- none of this could be taken into account when Roe was decided. Oh, there was discussion in the original opinion about the increasing interests of the State in the survival of the unborn child, an interest growing each trimester until "viability," that is, when "the fetus... presumably has the capability of meaningful life outside the mother's womb." But the court concluded, after viability, even though the State has a valid interest "in the potentiality of human life," the State's right to "regulate, and even proscribe, abortion" is not unlimited. After "viability," the State can regulate or even ban abortion except "where it is necessary, in appropriate medical judgment, for the preservation of the life or health of the mother." (410 U.S. at 164-165.) This is the proverbial exception which swallows the rule. It provides the 'justification' for late term and even 'partial birth' abortions.

The interests of the unborn were swept aside. "[T]he unborn have never been recognized in the law as persons in the whole sense." 410 U.S. at 162. Even though that sentence recognizes that the law has traditionally conferred some rights on unborn persons, at least unborn persons at particular stages of gestation ("quickening"), and even though the preceding sentences of the opinion spelled out some of those instances in which rights had been conferred on the unborn, the Roe court saw no need to strike any balance between the rights of the mother and her unborn child. There was only a contest between a woman and the State.

Roe provides the perfect illustration of why courts should not be the fora where "rights" are first recognized. Lawsuits produce winners and losers. In Roe women allegedly "won" something. I would suggest that the real winners in Roe were irresponsible males who could avoid the consequences of their irresponsibility by a simple, legalized "procedure." The Roe court wanted to cast the State as the "loser." But there's no doubt who the real losers were. The losers were the unborn.

If Roe were overturned tomorrow, the elected representatives of the people in the various states could then consider their constituents' wishes and views. A poisonous, divisive boil would be lanced on the body politic. Abortion virtually on demand would remain legal in New York, California, Oregon, probably Vermont, maybe Massachusetts -- and it would quickly be made virtually illegal in several states -- and variously limited in all of the others as people, through their representatives, struggle to figure out the moral question of when human life begins and when human rights must be protected.

Why would that be so terrible?

Instead, if President-Elect Obama keeps his promise, and if the newly enlarged Democratic majorities perform as expected, Congress will pass, and Obama will sign the Freedom of Choice Act. Like Judge Douglas and that earlier generation of Democrats, the proponents of this bill are seeking an end to the controversy, ignoring the question of whether the practice is ever (or is sometimes) moral. But, though it may well pass, the Freedom of Choice Act will not fulfill this goal. We will intead have a new 'Fugitive Slave Law' to go along with our generation's 'Dred Scott.' One "civil rights" struggle will be over... and a new one will begin.
Posted by The Curmudgeon at 8:30 AM

Okay, when I've debated liberals on this point I'm told that you cannot legislate morality, but plain and simple, abortion is used all too often as late birth control. So what's being legislated, whether by the bench, by congress or as an exectutive order, is immorality.

Well, Cliff, the thing is that we do legislate morality. All the time, in fact. Laws against murder or theft represent moral judgments. As do drunk driving laws.

Still, your friends are partially right: You can't legislate morality in that you can't impose, by legislation, a moral judgment that is not widely shared. Prohibition, for example, represented a moral judgment imposed on an unwilling populace. The populace wasn't entirely unwilling: Laws against alcohol consumption were cheerfully accepted in some localities -- still are, in fact, in some -- but there were huge pockets of resistance. Eventually, after a whole lot of heartache, a new consensus emerged... and Prohibition was repealed.

The heart of the issue seems to be whose morality? The morality of the local, state, regional or national community?

In most other areas of inquiry we seek consensus of the larger group. Here, there's a movement to balkanize morality. We did that with alcohol after Prohibition. There's movement in the same direction with drugs. The trouble with these comparisons is that they are not so immediately matters of life and death.

I'm babbling a bit, obviously I'm not sure where I stand. But, you're making me think.

Roe vs Wade will always be one of the most contentious legislations.

Hi, Cur, thanks for putting the civil into public discourse and raising the standard in blogosphere. I need to think a bit on your posts before commenting but wanted to say thanks for posing these interesting questions so well put.
I think you should be proud to be compared with John Adams btw. A great thinker and generous friend.

Mr. C, you are really making me think (ouch!)

Have you ever considered compiling your essays into a book?