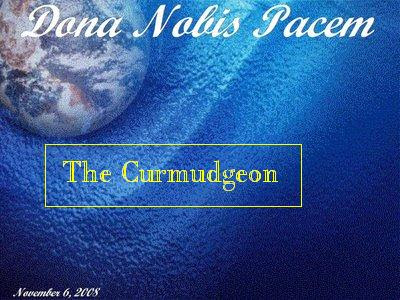 It's time once again for Queen Mimi's Blogblast for Peace.
(Yes, you too may still get your own Peace Globe.
Simply follow the link.)
Lord knows, this world could use some peace. But... there's a catch. A hitch. A wrinkle. An obstacle.

For any two people or any two nations to live in peace, both people and both nations must want peace.

Winston Churchill was reviled by many throughout most of his life as a warmonger. The Victorian junior cavalry officer, trained in terms of flashing sabers and galloping horses, was never quite extinguished in his persona. He spoke the language of war. But he could have prevented, and desperately tried to prevent, World War II.

He was frustrated at every turn by Stanley Baldwin and Neville Chamberlain and the other appeasers.

These were honest men, at the start, so badly traumatized by the carnage of World War I that they sought peace at all costs and at any costs... and ultimately made war inevitable. They could not believe that any other responsible world leader would want war. Thus, they could not accept that Hitler was openly courting a renewal of the World War. They would not believe the evidence of Mein Kampf. They made excuses for Hitler's repudiation of the Versailles and Locarno Treaties, his reoccupation of the Rhineland, his annexation of Austria, his dismemberment of Czechoslovakia. In the end, the Men of Munich were as irrational as Hitler. They were not irrational in the same way. Hitler had insane visions of a Teutonic world empire. He seems to have held these notions until the Soviets were well within Berlin and he finally took his own life. The Men of Munich clung as desperately to the idea of peace, shedding their honesty and their honor in a futile quest.

But it didn't have to happen. Churchill was there all along, urging collective action through the League of Nations and, thereafter, when the League was exposed as a paper tiger, by other diplomatic means (yes, including British rearmament to counter the growing threat on the Continent). It is a fact of history that the Rhineland reoccupation could have been stopped with only a token show of force. Hitler would have been gone in 1936. The price of peace rose with each outrage thereafter. We know now the price England especially paid for waiting until 1939, when Hitler invaded Poland.

So why the history lesson on a day that is supposed to be devoted to peace?

Because in our world there are those who see our desire for peace, for brotherhood, for tolerance, as weak and decadent. There is much about our culture, particularly here in America, that may well be decadent. But I'll take America, with all its occasional excesses, over (for example) the Taliban any day, thank you.

So do not misinterpret our prayer today for peace: We want it, we cherish it, we value it. But we know that peace can happen only when everyone wants it. Therefore we pray today especially that even those who hate us and would wish us harm will experience a change of heart and that they, too, will join us in praying dona nobis pacem.
Posted by The Curmudgeon at 9:15 AM

yup, that's the truth curmy. peace to you my friend...

"Peace is not an absence of war, it is a virtue, a state of mind, a disposition for benevolence, confidence, justice."
-- Baruch Spinoz

A terrific point. Nothing will happen until it's what everyone wants, but that won't stop me from saying a prayer for peace anyway.

Well, guess we all really do need to line up, hold hands and sing "Let it begin with me!" Someway, somehow, peace and love of one's fellowman has to prevail.

Peace to you and yours.