It's not so Super this week in Chicago

Last year at this time, things were pretty exciting here in Chicago -- the Bears were in the Super Bowl. 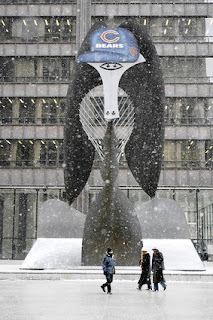 Was this just last year?
Last year at this time, a story like this one in this morning's Tribune, about how the "the stressful emotions of big [sports] contests may in fact increase the risk of chest pains or cardiac arrest in spectators," would have been timely.

This year the story is merely a painful reminder of how the mighty have fallen.

Patriots vs. Giants? Boston vs. New York? Why should anyone outside the Northeast care?

But -- if history is a guide -- the game will either become quickly lopsided, one way or the other, or it will degenerate into a boring field-position-wait-for-someone-to-make-a-mistake kind of game. And the only thing worth watching will be the commercials.

The Go Daddy! folks are trying to make the most of out their annual 'battle' with the network censors about how much they can get away with in their commercial.

Please. The game is on Fox this year. The promos that Fox typically airs for its own programs during regular season football telecasts are not suitable for younger or more sensitive viewers -- can there really be many rules for advertisers?

Lewis Lazare's column in this morning's Chicago Sun-Times reports that a company called Weatherproof has bought a two second ad slot for the Super Bowl this Sunday, at a reported price of $200,000. Lazare quotes Weatherproof CEO Eliot Peyser as saying, "We would have preferred to buy a one-second time slot, but it takes exactly 2 seconds to say the word 'weatherproof'." Not surprisingly, Weatherproof is being coy about what visual will accompany the micro-ad. They're hoping viewers will pay attention and look for the gimmick.

I'll probably blink at just the wrong time.
Posted by The Curmudgeon at 8:46 AM