Dear Mr. Obama: She's doing it to you again 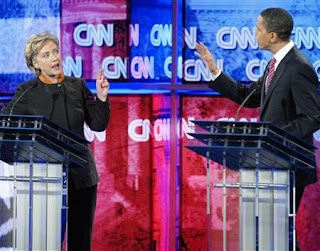 (REUTERS photo by Jonathan Ernst)
I do not refer to her bringing up Tony Rezko -- his upcoming trial may show whether you were dirtied on the way up through the sewer of Chicago politics and, if so, how much or how little -- but Senator Clinton is not waiting for the trial.

No, she's trying to weigh you down with those crazy expectations again.

Her media people are feeding everyone -- even those columnists and commentators in your corner, like Jennifer Hunter in this morning's Sun-Times, people who should have learned better after New Hampshire.

Now the experts are spouting that Clinton's giving up in South Carolina -- that she's altered her travel schedule to head west to some Super Tuesday states out there -- that anything short of a loss by a double-digit margin in South Carolina would be a 'good week' for the Clinton campaign.

This is Lou Holtz, once the coach of Chicago's other pro football team, the Notre Dame Fighting Irish. Later, he was head football coach at the University of South Carolina.

But that's not the tie-in.

No, when Holtz was at Notre Dame he was a master of building up his opponents and holding down expectations.

The Little Sisters of the Poor would be coming to South Bend to be sacrificed to the Fighting Irish on the following Saturday afternoon. The Vegas line would be 70 points or maybe 80. But Holtz would come out of the film room shaking his head at the press conference, expressing tremendous fear about some tendency he'd noticed that, if not handled very carefully by his boys, would allow the Sisters to snap their 500 game losing streak. The press would laugh at the very idea that Holtz's boys would even work up a sweat on Saturday -- and Lou would get gloomier, even more pessimistic. If you took him seriously, even for a minute, you wondered whether his boys would even bother to show up.

Think Lou Holtz, Senator. Start tamping down those expectations that Senator Clinton's surrogates are building up.

Don't say I didn't warn you.
Posted by The Curmudgeon at 9:25 AM