How to manage people: Setting priorities 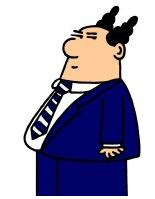 The last couple of days here at the Undisclosed Location remind me of a guy I used to work for. I hope you'll forgive me if I make this guy sound like the inspiration for Dilbert's Pointy Haired Boss. Actually, I think one reason why Scott Adams is so successful is that there have been so many inspirations for the Pointy-Haired Boss.

Anyway, whatever I was doing at that moment was always the wrong thing to do. I needed to be working on this matter instead.

From time to time he'd come in my office to interrupt me with advice: "Curmudgeon," he'd say [or he would have if that were really my name], "you have to learn how to figure out what's important. What are you working on right now?"

"Nothing," I wanted to say, "not with you barging in here interrupting me every five minutes." On the other hand, I wanted to remain gainfully employed. So, instead, I'd say:"The Smith file."

"Smith?" he'd bellow. "Smith? I just got off the phone with Sally [the claim manager for the XYZ Insurance Co.] and she's screaming for a report on the Jones case. That should be your top priority. What else are you working on?"

My office in those days was rather like my office now -- piled high with papers and books at precarious angles. A major difference is that, in those days, we could smoke in our offices. Somewhere weighing down one of the stacks of papers was an ashtray. Probably with a lit cigarette smoldering.

And, oddly enough, I never actually caused a fire.

But, oh man, would it have been spectacular one if I had... all that paper!

Anyway, I'd quickly scan the mess on the desk and respond. "I've got a motion due in the Black case."

"Black?" he say. "That's important. The people at ABC Insurance are watching that at the highest level. You should make that your top priority."

It was cruel, of course, but sometimes I couldn't help myself. So I'd keep the conversation going. "What about the White case? The reply on that is due Friday."

"The reply?" he'd ask. "Well, then, that should be your top priority."

"OK," I'd say, as though I cared about all of this. "What about Green? We were holding off on the status until the depositions were done and it's due for billing."

Billing? There was nothing nearer or dearer to this man's heart. Or to the organ that pumped blood in his body where a human heart would have been. His response was, therefore, predictable: "Oh, yes, Green. You'd better make that your top priority."

I of course knew he'd never simply agree with me, not without asking a few questions... just to be sure. "What about Brown?"

"We were supposed to get the summary judgment motion on file last week but the plaintiff's deposition didn't come in until this morning."

"Last week? Oh, no. That won't do. You have to make that your top priority."

Somehow I kept a straight face in all this... even when I played my final card (I had work to do and I had to get back to it).

You know what that last question was, don't you? You guessed it: "So then I should put Smith to one side?"

"Are you kidding?" he shouted, losing patience with me at last. "That should be your top priority."

Having established to his satisfaction once again that he was the boss and was managing the lowly, ignorant employee, he turned on his heel to leave the room. But he had to pause in the doorway with just one more bit of advice. "Curmudgeon, really. You have to learn how to set priorities."

Anyway, it's been like that here the last few days... and I'm still no better at prioritizing... and I'm the boss now and there's no one to blame.

Darn it.
Posted by The Curmudgeon at 3:39 PM

Bee busted you. That said, the need to order work in your and my business means billable hour upon billable hour. That was a goal this year?

Ah, but it still made for a darned good post, maybe even a smile or a smirk as you wrote it, allowed for a little levity which then often makes way for one to get a lot more work done -or at least easier to do some work after you've had a little chuckle.

Honestly, how can everything be so more important than anything else?? How many "top priorities" can there be? In the real (not legal) world...

Bee, Dave -- I don't think Bee "busted" me... I had an expert's dep yesterday morning... that dragged into yesterday afternoon... and then I had to run over to the courthouse to file some stuff... and wait in line to pay a $6 fee for an alias summons... the line being incredibly long because everybody else was filing one or more new cases (which takes time) and two of the five or six windows were actually open.

Well, there was a clerk at a third window, but she was opening and filing stuff that had come in the mail.

We have budget cuts in Cook County, you know.

And there were still more 'no fee' papers to file -- but the clerk wouldn't take them at the window when I finally got there and I wouldn't present them anyway, lest I be stoned by those waiting behind me.

So I got in line at the self-serve no-fee file-stamping machine.

By the time I got back to the office this post was all I could do... despite all my other top priorities.

And here I am again.

And, Jeni, thanks, a little levity does help. But how did you know I was smirking?

And, Ralph... this isn't the real world? Could someone wake me up, then, please?

See, here's the deal, Bee and I thought that such quality took hours and hours of writing and editing. Little did we know.