America is lost in space 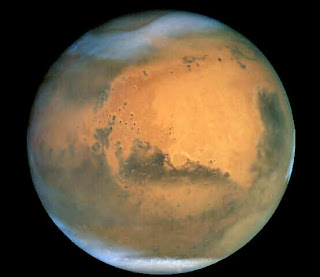 Here's a story posted on Yahoo! News the other day about how Russia believes it has pulled ahead in the race to Mars.

Americans don't think we're in a race for Mars. Instead we're obsessed with whether Dr. Phil should or should not do a show about Britney Spears... or whether the Patriots will or will not succeed in their quest for an undefeated season... or whether Roger Clemens did or did not use steroids.... We are navel gazers now, not star gazers. Unless the 'star' is Tom Hanks. For Americans, a 'binary star' is Brangelina... or Tomkat.

I know I've used this line before, but I wonder if there was a similar mood in Portugal in the decades after Prince Henry the Navigator -- and I don't refer to an obsession with 'celebrity' or trivia, but rather to a belief that we must look inward, and solve our own problems at home, before resuming our outward drive. Portugal never resumed.

America is a frontier nation: Expansion is hard-wired into our character. Would you rather see our restless, questing youth carving out new cities on the Moon or Mars... or dodging bullets and bombs in Iraq and Afghanistan? There are those in America who are prisoners of the expansionist urge, but do not have the vision of outer space. I believe they're called "neocons."

And what if Earth really is on the cusp of a dramatic climate shift? Even if Al Gore's all wrong about human contributions to global warming, the Earth has experienced dramatic climate changes in its history. And there have been cataclysmic extinction events in Earth's past as well. We're just learning about 'supervolcanos' -- catastrophic eruptions, like those of the Yellowstone caldera, volcanos so huge that we puny, short-lived, newcomer humans didn't even recognize them for what they were. And then there are meteorites, like the one which finished off the dinosaurs 65 million years ago. (The latest research suggests that dinosaurs were already in decline -- being unable to cope with climate change.) The survival of our species may depend on scattering our genes across the Solar System... and eventually the Galaxy.

Unfortunately, we can't just expect private industry to take over and put us into space to stay: Rockets must fly through airspace -- government regulated -- and over cities and rivers and towns and lakes and streams. There are pollution regulations to consider, and safety regulations, too. (What goes up might come down on an undesigned trajectory....) No, any private Enterprise (oh, there's a pun) would still be subject to serious government oversight. For the present, therefore, we must rely on the national government to take us to these new heights.

But governments -- I think all governments, not just ours -- are poor innovators. Meanwhile, in other news, India's Tata Motors has unveiled its new ultra-cheap Tata Nano. It turned out not to be the miracle compressed air car from Tata that I wrote about last May... but it may be India's Model T.

One senses that India may be a country on the rise... that the baton of innovation may have passed from America to South Asia.

I submit, in fact, that these stories are related.

India seems to have a national vision, a goal, a dream to modernize and take its place among the great nations of the world. America plods on, without vision, without consensus, without a great goal behind which we can unify and move outward.

I just finished reading Stephen Baxter's 12-year old novel, "Voyage" -- about a trip to Mars that never happened. Baxter's a pessimist among pessimists: I think we can do much more and much better than he was willing to envision. But even he recognized that a Mars trip was important, worthwhile and achievable.

I write that America is lost in space fully aware of the Space Shuttle and the ISS -- the Space Truck and the Space Truck Stop. We have a Chicago-area astronaut on board ISS right now -- Dan Tani -- marooned, temporarily, because of the latest delays in the launch of Shuttle Atlantis. Tani briefly percolated into American consciousness because his mother was killed last month in a railroad crossing accident... and, of course, Tani couldn't get home for the funeral.

The Shuttle is about to be retired; it should have been retired long ago. But there's no replacement ready to go. There's no apparent broad-based support in this country for continued exploration -- and exploitation -- of outer space. Am I the only one who sees this as a tragedy?
Posted by The Curmudgeon at 8:38 AM

Feels like an appropriate post for the day after the death of a famous explorer (who I was surprised was still alive - who knew?). Sir Edmund Hillary, the first man to climb Mt. Everest.

space? space??? honey our youth can't make change!!! it scares me to death.

It's whether the discoveries made can really make a difference to people's lives. Many scientific experts will tell you that it does, but I'm no authority on this subject. I have visited NASA and found it fascinating. I really admire the bravery of the astronauts. I can't see the USA dumbing down their space exploration.

Space exploration is important, but how much money and talent should be spent on it when compared to society's more pressing needs? I have no clue. That's for the visionaries to debate.

I hope there are some visionaries out there, anyway.

Thetre is nothing as trivial as celebrities are.

You know America spends too much energy on the wrong things as this post clearly states. Bravo.

Did you ever think maybe we are at the same type of impasse that Columbus hit when he went to visit Queen Isabella? The naysayers then who just knew the earth was flat and that a voyage by sea would fail because the ship would fall off the edge of the earth, ya know. Granted Isabella was willing to fund him thinking of all the riches to be gained by finding a new route to the east and the spices, silks and whatever else -probably slaves. Different mind set ya know. But still she had vision of something better -over the edge of the ocean. Who is there who holds visions such as those today? Perhaps if we would give up this age old pressing need to make war - make love, not war sounds a hell of a lot better to my mind even at 63 and with no partner gonna come my way, there's still the thought ya know! We know enough about society to realize what should be done to help people and yet, we become very close-minded and say to those in need "Get up and help yourself." Well, gee - just give me a hand to get up off the ground and I can do that, but we close our ears -no money,no fame in that.
Yes, we do go on and on about celebrities who do nothing but what could be akin to Nero watching Rome burn while he fiddled! I am no where even one iota close to having the visions of what to do to help society, to bring about the change (gee there's the buzz word right now -isn't it -change) but isn't space exploration today's version of Columbus sailing off to discover the east by sailing west? No, he didn't discover the far east and the treasure Isabella dreamed would come her way, but he did pave the way to discovering another land, other riches (if everything has to be put to a monetary value) and we know a hell of a lot more today about our planet and outer space than he knew about the ocean back then. We're that much ahead of that game but we're playing it kind of like adults play with little kids - let them win once for their self-esteem, even if we could have won. Space exploration should be done, continued, simply because it is there, needs to be learned about whether it is actually ever utilized for the earth's society or not. Does any of this make sense to anyone else? I know what I mean - hope other understand it too.

OK, I'll be the wet blanket and say I think there are many more important things to spend tax money on than space travel - to anywhere, for anything.

And - I'm sorry but if someone is on a "race to Mars", so what if they win? Do we have to win everything?

I know, I know, my position isn't popular...it's not the first time and won't be the last.

Well Hilda I would have to agree with you to a point. There is nothing wrong with exploring the universe and the stars...but not at the expense of basic human needs like health care;food and affordable housing.

I think it is about more than just the space race. I think Cur's post suggests that we are not striving or hurrying for much of anything except celebrity. Long term projects or visions have been hijacked by short term excitement. I agree. So I've done my best to stop reading the twaddle. I don't know what Bratz are, so I don't care what a so and so expert says about decrying the impact on our youth. If the TV news is full of such twaddle, I'll stop watching, and, I'll take it one step further--I'l lwrite to them and tell them why I am not watching.
OK call me an old hippie, but I think maybe that is the best approach open to us as individuals. Perhaps if I were a media mogul or a CEO I could do more or toehr than that but I am just a person.

If you think that book was pessimistic, try Titan. Just don't read the epilogue.

Ben Bova's recent Grand Tour of the Solar System is a little more upbeat, although Earth has gone down the toilet in entirely predictable ways, at least Humanity is getting out there.

As regards real life, it's incredibly short sighted to neglect the idea of space travel 'because we should spend the money on other things'. Like what, invading other countries for the personal greed of a few old men and their bizarre idea that being rich & powerful means anything in the long run?

I despair for the future of this planet sometimes. And here we are today talking ourselves into a global recession that's going to ruin millions, so a few hundred can get rich off the back of it. Bah.