Barb, the world famous impresario who took Heads or Tails from total obscurity to the world stage, today asks us to write about "the Five Senses."

I didn't think anyone remembered them anymore.

And with good reason. 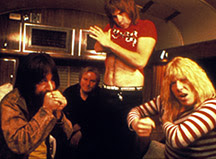 Look at these guys: The Five Senses.

This was perhaps the greatest rock band in the history of Bumbleburg, Illinois, a Chicago suburb so obscure that you'll never find it on any map anywhere.

Well, actually, only three are pictured here. After joining the band, the drummer, Eggbert "Stinky" Malone, swore off bathing entirely until the group received a recording contract. Since the band never did get a recording contract, it wasn't so very long before none of the other band members could stand to be in the same room with him. That was the real reason the Five Senses used those enormous smudge pots on stage at every gig -- they were attempting to mask, as much as possible, the smell of Stinky Malone. The band eventually broke up because the cost of the smudge pots ate up all the meager proceeds of the band's engagements.

It was a dark day for music lovers -- but a bright new morning for the citizens of Bumbleburg because, on the morning after their farewell performance, Stinky Malone showered. The EPA took Bumbleburg off its list of most polluted municipalities shortly thereafter.

No one knows whatever happened to Malone, by the way. Some say that all that was left of him was dirt and grime -- so that, when he showered, he simply was washed away. Whatever the truth of the matter, he's never been seen again.

The other missing band-mate is Louis "High Note" Zukerman, the second lead guitar. High Note had this amazing head of blond hair. He looked like he was eight feet tall. He had to duck under doorways to get through. Even as a youngster, High Note's hair was piled so high on his head that he was asked to go out for his high school basketball team. He was cut from the team after he got a haircut. It turned out he was only 5'3" tall. The hair grew back eventually. And, oh, could High Note scream.

Why Zukerman was missing when this historic photo was taken has never been adequately explained. One theory is that he would not have fit in the room.

But any fan of the Five Senses -- and, at one time, there were as many as six -- would tell you these were the core band members anyway. On the left you'll probably not recognize Vince "Tasty" Freeze, the other lead guitar (no, that's not a harmonica, it's a sandwich he's mouthing -- there was so little time to eat for bands on the verge of earning a profit). In the center is bassist Elmo Guggenheimer. Elmo was called Dr. Feelgood by his bandmates. Some say it was because you could feel the intensity of his bass lines right up through your feet when the band performed.

Actually, Elmo got his nickname because he sold all sorts of various little pills trying to make ends meet. He's in a Federal penitentiary these days.

Finally, on the right, there's the rhythm guitarist, Nick Balzeko. Nick's guitar was never actually plugged into an amp during any of the band's concerts because he couldn't play a note. He never knew it, though, because he was deaf as a post. And the other band members thought he had a good look on stage.

Nick also left us too early: He was struck down by an ice cream truck one afternoon near a Chicago park. He couldn't hear the truck playing "Turkey in the Straw."

As for the guy in the back? He was a process server.

Hahahahahaaa!!! Yes, that was out loud!!!

Thanks for the laughs!

It seemed so real!

Very clever! Thanks for the giggle!
Happy Tuesday. :)

You know, Spinal Tap is one of my all time favorite movies!

You're so much fun! Wonderful writing!