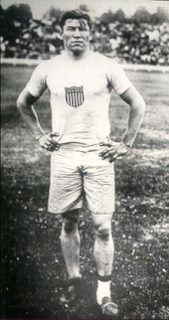 In its July-August issue, Smithsonian Magazine carries an article by Sally Jenkins, "The All-American."

The title of the linked on-line article is better: "Why Are Jim Thorpe’s Olympic Records Still Not Recognized?"

It's a darn good question -- and there's no good answer.

Jim Thorpe, a member of the Sac and Fox Indian tribe from Oklahoma, won the decathlon and pentathlon at the 1912 Olympics in Stockholm. According to legend, when Thorpe received his gold medals, Swedish King Gustav V said, "You, sir, are the greatest athlete in the world" -- and Thorpe replied, "Thanks, King." It was a pitch-perfect all-American we're-not-impressed-with-all-the-kings-and-crowns-in-the-world response. Wikipedia notes that Thorpe got a ticker-tape parade in New York on his return from the Olympics.

But Thorpe was not just a track and field athlete. He played professional football for the Canton Bulldogs before and after the formation of the National Football League in 1920. He played for a number of teams in the infant NFL, ending his playing career with the Chicago Cardinals after the 1928 season. He played his college football for the Carlisle Indian Industrial School, which wasn't really a college at all, but a Pennsylvania boarding school designed to "civilize" American Indians.

Yes, that was a thoroughly racist attitude. But the Carlisle Indians, coached by Glenn "Pop" Warner, played a major college football schedule and, for a time, led by stars like Jim Thorpe, so thoroughly dominated that sport (and sports generally) that, even today, athletic teams from grammar school through the professional ranks have names like "Indians," "Braves," or even "Redskins." The ignorant protests of the politically correct crowd (including, of course, the NCAA) that these team nicknames are racist slurs are simply wrong. Teams name themselves for other teams or qualities they admire, that they wish to emulate -- and early in the 20th Century, most athletes (of any ancestry) wanted to emulate the skill and success of Jim Thorpe and the Carlise Indians.

Thope also played major league baseball from 1913 until 1919. Indeed, it was baseball that cost Thorpe his gold medals. It seems that in 1909 and 1910, Thorpe -- like a whole lot of college kids -- played semi-pro baseball to earn pocket money during the summer. Most of the kids used aliases. Apparently, Thorpe did not.

In 1913, when word got out that Thorpe had made a few pennies from baseball, the IOC stripped Thorpe of his medals and rewrote the record books to edit out Thorpe's dominating performances. How dominating? Thorpe's time in the 1,500 meter run, the last decathlon event, was not beaten until 1972. And Thorpe ran the race in mismatched shoes (someone had walked off with his shoes early in the competition). Jenkins' Smithsonian article quotes Olympic historian bill Mallon, a co-founder of the International Society of Olympic Historians, as saying he believes Thorpe's 1912 performances establish him as "the greatest athlete of all time."

Thorpe was discredited because he was not a "pure" amateur. Times changed. LeBron James will be playing basketball for Team USA in London any day now. Jenkins' Smithsonian article notes that, in 1982, the IOC, ostensibly bowing to public pressure,

delivered two replica medals to [Thorpe's] family, announcing, “The name of James Thorpe will be added to the list of athletes who were crowned Olympic champions at the 1912 Games.” What’s less commonly known is that the IOC appended this small, mean sentence: “However, the official report for these Games will not be modified.”

But, of course, the records already had been modified. In 1913. They've not been put right yet.

I understand that you may not be as excited about this as I am. You may say this is only sports. It is therefore trivial. Who cares if records -- whether Thorpe's times or Penn State's football victories -- are blotted out according to the whims and fashions of the day?

If you accept the premise that we can rewrite the past to suit current needs and requirements (at least of the persons wielding the erasers), why can't the past be rewritten in other areas as well? Henry Ford supposedly said "history is bunk." George Orwell knew better.

We'd better know better too.
Posted by The Curmudgeon at 5:33 PM

Email ThisBlogThis!Share to TwitterShare to FacebookShare to Pinterest
Labels: History, Roadkill -- politics in the middle of the road, Soapbox, The Sporting Life

As a Penn State Alum, I most definitely agree with your words in this post -about both Jim Thorpe and Penn State!
Anyone who knows anything at all about sports and Jim Thorpe and about all the controversy with Penn State now knows that it is what it is -that thing called "history" and you can say it is erased off the books, try to convince people it never happened but because it is history, that just can't be changed in that manner!