I'm putting up the post that I put up today on The Blog of Days here too. I hope you make visiting The Blog of Days a regular part of your online experience -- there's something new there every single day -- and (unlike this blog) the entries over there tend to be much shorter. 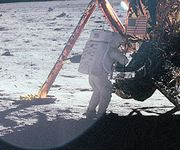 It was on this day, 43 years ago, that a human being first left footprints on a heavenly body other than Earth. Thus, today is Moon Day.

I'm just finding it hard to celebrate. Neil Armstrong and Buzz Aldrin are old men now -- not yet as old as John Glenn (I hope you did celebrate his birthday this week) but it's 40 years and counting since anyone has been to the Moon. Here's the complete list (complete with links to Wikipedia entries on each astronaut and mission):


In all the years since, we've flown no higher than the International Space Station. Yes, it is a remarkable achievement to build even a small outpost that's technically in Outer Space -- but the ISS is in Low Earth Orbit -- it's just camping in Earth's backyard compared to the wonders that lie before us. 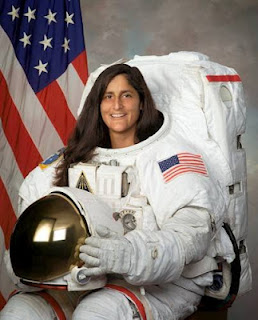 You probably didn't know this, but a new crew just arrived on the Space Station -- launched from Kazakhstan on July 14. Yes, the new crew includes one American, CAPT Sunita L. Williams, U.S.N. Williams flew to the Space Station from Russia because we have no operational manned spacecraft in the United States today.

I saw this cartoon on Zach Weiner's Saturday Morning Breakfast Cereal a week or so ago. Substitute "manned space program" for "large particle colliders" and you'll have a pretty good idea of what I wish I could say to all those people who say "we have to solve our problems on Earth first before we venture into space...."

yup, completely agree. we dumbed down science in schools as well as in life. sigh...