There's a Christmas tree lot that sets up every year on a vacant parcel near the el station that I use most mornings and I love the scent of the fresh pines -- but I can't see killing a perfectly good tree just to have that smell in the house for a month or so. We've always had an artificial Christmas tree at the Curmudgeon house.

We'd used the same tree now for a dozen years or more and it was getting to look more real with each passing year: The tree was shedding needles like crazy and its bald spots were getting bigger and more in need of tinsel and garland disguises.

Putting it up has been a big pain. I usually got stuck with putting on the lights. Putting on the lights does not mean just wrapping the strings around the tree boughs; it means untangling the strings, finding out which ones have decided to stop working in whole or in part, figuring out whether bulb replacement will resuscitate said string.... The process takes hours each year and usually results in my completely losing it at least once. Merry #$%*@!! Christmas, indeed.

And as much as I hate putting up the tree, Long Suffering Spouse hates taking it down more. Because she usually does it alone, despite pleas and entreaties to any of her children still in residence on or shortly after the Feast of the Epiphany.

Oh, yes, the kids: Our teenage and 20-something kids want the tree up and they want to tell stories about the ornaments (several of which they made as pre-schoolers), and they want to watch the annual ritual of old Dad losing it over yet another $%*!!@ string of lights that won't work -- or, better, that stops working when it is halfway on the %&@!!# tree. But the kids don't actually want to do things.

So Long Suffering Spouse and I have talked for a couple of years now about simplifying. Maybe we wouldn't put up a tree at all.

The center of our bay window in the Curmudgeon home is usually taken up by a large ficus tree in a pretty large basket. Last year I suggested that we decorate that instead of putting up our usual tree. I even found some red bows to put on the branches. My suggestion was overwhelmingly vetoed by the kids. The bows, however, are still on the branches.

A couple of weeks ago Long Suffering Spouse and I stopped by the neighborhood Walgreens to pick up our prescriptions. It was there that I saw the potential solution to our Christmas tree dilemma: 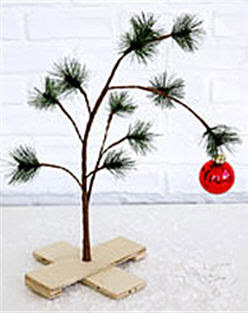 A Charlie Brown Christmas tree! Just like the tree in the photo, it came with a single, pathetic-looking red ornament and a wood base. And for $10 it seemed like a real bargain.

"You'll never get away with it," Long Suffering Spouse told me.

We took the little tree home and hid it in the garage rafters where the 'regular' Christmas tree also resides in the offseason.

Fast forward now to Black Friday. Long Suffering Spouse and I did not attempt to join the mad throngs of post-midnight shoppers. We even waited a discreet interval before coming downstairs and making the coffee, so as to allow Older Daughter and her husband some more snooze time on the new futon. Everyone stayed up much too late on Thanksgiving night.

By late morning, even Middle Son and Youngest Son had roused themselves from slumber. (Middle Son had to wake up -- he's working retail this Christmas and was due at the mall at noon.) With nearly the whole family assembled (Oldest Son excepted) I announced that it was as good a time as any to take down the tree and start decorating. I got up to head out to the garage.

Of course, no one volunteered to help.

But the protests began as soon as I walked in the door with my little box. I set the tree up in about a minute and a half, and announced that we were ready for the season. Oh no, we're not! cried the kids. You can't be serious!

You don't know how serious I am, I told them.

They didn't believe me.

They were starting to believe me when morning became evening and no moves were made to add to the decor. 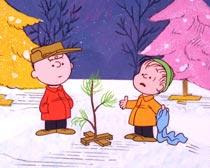 It's not a bad little tree, I told them. Maybe it just needs a little love.

But the little tree was getting no love at all from the kids. And, indeed, neither was I. I wasn't really afraid of being murdered in my sleep... but I may have slept more warily than usual Friday night.

The next morning Long Suffering Spouse and I went out. The kids demanded to know where we were going, but we refused to say.

We went to a swimming pool place that sells artificial Christmas trees every season... and we got a new tree. But this one has the lights already installed.

So I didn't simply my life as much as I hoped... but I didn't fail entirely.
Posted by The Curmudgeon at 9:02 AM

We traded in our decade-old old artificial tree for a slightly taller, fuller, pre-lit model a few years ago. (We bought it a day or two after Christmas when the retailers are slashing the prices on seasonal decor severely.) I love, love, love our pre-lit tree!

We also transitioned to mostly shatterproof or break-resistant ornaments so our toddler can (painlessly) be an integral part of the process.

These days, Christmas trees are grown as a renewable crop, with new ones replacing the ones that are cut. So I don't feel badly about cutting one for a month's enjoyment. I love taking my boys to choose and saw down our tree and you just can't beat the incredible smell of an evergreen. It's one of the non-negotiable traditions in our family.

i love this post curmy. first of all there are no sports to mess it up, next there is a warm family feeling to it. and finally it shows humor... good show!

that's funny. I bought a little 48 inch tree in a pot at a sale at Home Depot. It's pre-lit and it's pretty.. and it was easy to plug in - on a table by the front window.

I love it. My husband is fine with it. My daughter hates it. My son has yet to comment.