Curmudgeon hung up on clothesline controversy 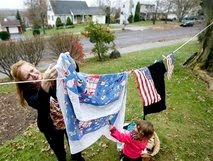 At left we see a Pennsylvania lady, Carin Froehlich, hanging her clothes out to dry.

The local authorities in Froelich's hometown of Perkasie, PA would rather she didn't. There's no law against hanging up the laundry in Perkasie -- yet -- but, according to this Reuters story, by Jon Hurdle, that I saw today on Yahoo! News, "a town official called Froehlich to ask her to stop drying clothes in the sun. And she received two anonymous notes from neighbors saying they did not want to see her underwear flapping about."

(For the record, Froelich says she dries her bloomers indoors.)

You'd think that, particularly in this environmentally-conscious age, people would be encouraged to use wind and solar energy to dry the laundry. But, apparently, such is not the case. I guess folks riding by in their SUVs, heading to Blockbuster to return their copy of "An Inconvenient Truth," find it offensive to see the neighbors' flannels flapping in the breeze.

And it isn't just in this one Pennsylvania hamlet that frowns on drying one's socks in the sunshine: According to Hurdle's article, local bluenoses have gotten into such a snit about possibly seeing their neighbors' frillies al fresco that "Florida, Utah, Maine, Vermont, Colorado, and Hawaii" have been moved to pass "laws restricting the rights of local authorities to stop residents using clotheslines."

According to Hurdle's article, one of the persons trying to move legislators toward this common sense (and energy-saving) position is Alexander Lee, 35, a recovering lawyer who now serves as the executive director of Project Laundry List. The front page of the Project Laundry List website claims that clothes dryers "use 10 to 15% of domestic energy in the United States." I'm not entirely certain what "domestic energy" is but I do know that clothes smell better when they're hung out to dry and they don't wear out as quickly. Yes, in season, the Curmudgeon family laundry is hung out for public viewing. If you don't like it... look elsewhere.

Caveat: Folks who move into condo or townhome developments with homeowner association prohibitions against hanging out their clothes must and should abide by these restrictions. Or work to change them. (I can't help putting stuff like that in. Unlike Lee, I'm not a recovering lawyer.)
Posted by The Curmudgeon at 1:16 PM

Email ThisBlogThis!Share to TwitterShare to FacebookShare to Pinterest
Labels: Enviromania, News and Views

Sometimes, I do have to wonder about the level of sensibility -i.e. common sense -in some people who positions of quasi-power!
What is harmed by hanging laundry out to dry and what is gained -other than saving some resources and cutting back on individual electric and/or gas bills?

i was wondering about that "recovering lawyer" thingy!