I don't know how this story has played in other markets but, here in Chicago, the outbreak of nuclear war would have been treated with no more angst than Oprah Winfrey's decision, announced last night, to discontinue her Chicago-based talk show. 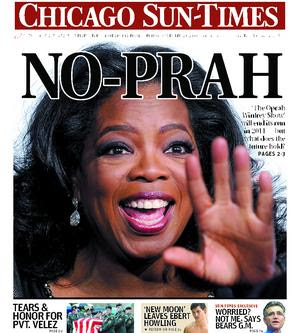 By the time the cover of this morning's Chicago Sun-Times was laid out, people had survived the initial shock. Thus it was only necessary to use END OF THE WORLD type in the headline.

I don't believe I've ever watched more than five minutes of an Oprah show -- but, like everyone else, I appreciate and admire the contribution she's made to Chicago and, in particular, to the redevelopment of the Near West Side where her Harpo Studios are located.

Oprah is going to discontinue her current talk show when her contract expires and then she is going to focus on her own cable network (OWN cable network... Oprah Winfrey Network... get it?). If you haven't already done so, you can read more about her plans in this AP story, posted this morning on Yahoo! News.

It is as yet unclear whether Oprah will relocate to Los Angeles (where she already owns a palatial home) as part of this transformation.

If she does, though, she will be just the latest to prove a sad truth about my home town: Chicago is the largest city on Earth to be from. In other words, when you really, truly make it... you still gotta go elsewhere.

I hope Oprah surprises us again, by maintaining a Chicago presence and keeping her studio here humming.

But I'm not making book on it.
Posted by The Curmudgeon at 11:07 AM

Email ThisBlogThis!Share to TwitterShare to FacebookShare to Pinterest
Labels: News and Views, TV

Here's a funny bit of synchronicity - I never watch Oprah. Don't dislike her, just find the show boring. But I turned on the tv yesterday and it happened to be on, near the end of the show. As I walked back over to turn it off, she began her teary taking-leave speech. And I thought, well for goodness sakes, it's just a talk show. We'll all get by. But check back in wiht me when Jon Stewart goes off the air - I might be seeing it differently.