Cub fans are really different from the rest of us

Regular readers know I'm a White Sox fan -- a tough thing to admit during this current road trip, but there it is -- and they may expect that I'll say something snarky about Cub fans.

Sometimes, though, it is not necessary to say anything. 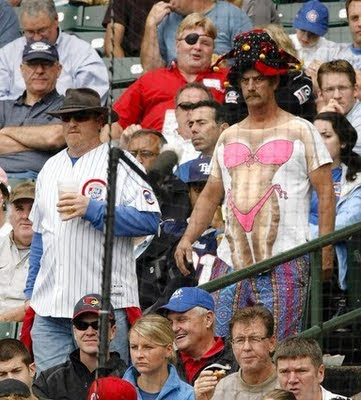 According to the Chicago Tribune website, from whence the above image was lifted, this was taken on Thursday, August 27, when the Cubs lost to the lowly Washington Nationals, 5-4.

Truth be told, I'd been planning a post like this ever since I stumbled across this image: 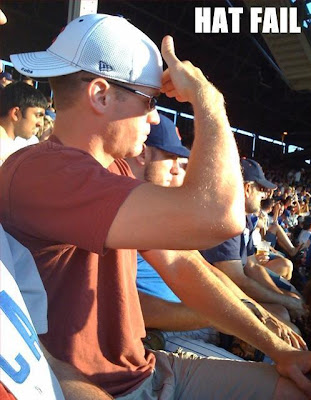 But this one is more... subtle... at least to the extent that you might not know where this was taken at first glance. Until you look at it a little bit.
Posted by The Curmudgeon at 7:10 AM

Email ThisBlogThis!Share to TwitterShare to FacebookShare to Pinterest
Labels: Just for giggles, The Sporting Life

well curmy, for a "sports" post, this was pretty danged funny!

number two grandson is quarterback this year, magicmatt, and number one grandson is, i forgot, something like full runner, oh wait, receiver, that's it. but sadly i can no longer blog about them because of my stalker.

The guy on the right in the first picture is a Cubs fan? Your evidence Sir? I was thinking I'd seen him in Midtown Atlanta.

Dave, we DO get many out of town fans for Cub games -- I frequently encounter them on the el when I'm going home... and they're returning to O'Hare... so it's possible that we are BOTH correct. I rely for my assertion on the Tribune link posted.

The first photo has obviously Photo Shopped. The fan was probably nude. Back 25 or 30 years ago I recall a fan running (streaking) at Comiskey Park.

Chicago fans usually maintain the decorum, so it probably was a tourist!

The second photo reminded of my 32 year old son. When I asked him why he wore his Baseball cap backwards, he replied "So my the back of my neck doesn't get sunburn".