The eyes have [had] it? -- or -- Sleeping through a test is a bad idea even long after graduation

I have low tension glaucoma. My condition was diagnosed years ago, when I was getting fitted for a new pair of glasses. My eye doctor referred me promptly to an ophthalmologist specializing in the treatment of glaucoma and I've been seeing him since.

Glaucoma, when untreated, robs its victims of their eyesight a little at a time -- the brain and eye compensate for the declining vision for as long as possible until the optic nerve deteriorates to the point where it can no longer provide enough visual information. Vision is lost around the edges with glaucoma; the "visual field" becomes increasingly impaired.

However, if the condition is properly diagnosed and treated, a person's loss of vision can be halted (though not reversed) and stabilized for years at a time.

This is where I've been for many years -- to the point where my long-time doctor is disappointed to see me during my twice yearly appointments. I have posed no challenge -- and I have not been a candidate for eye surgery. 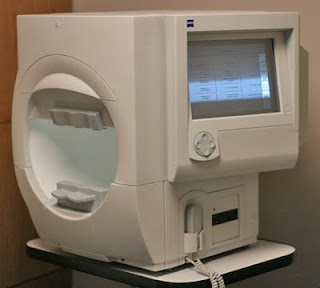 At every other one of these eye appointments, thus once a year, I am required to take a visual field test. Yesterday was the day appointed for this year's test.

Attached to the side of the machine, on what looks like a telephone cord, you can see a clicker.

The idea is that little dots of light of varying intensity will be flashed inside this box and the patient, whose head is resting on the edge of the box, with one eye covered, will push the clicker whenever -- and wherever -- the light is seen. If one has a 'blind spot,' he or she won't be able to see the lights flashed in that area.

The patient is required to stare at a central square during the test. Somehow the machine knows if the patient's eyeball moves to try and compensate for any blind spot.

(I know this is true, because the machine catches me every time I try to cheat.)

I have typically scheduled these tests for as late in the afternoon as I can because, after this test, my doctor will dilate my pupils to examine the condition of my optic nerves.

It's hard to read with one's eyes fully dilated.

But it's not all bad: As I walk back from the doctor's office to the train, going home, mothers will see me and pull their children close to them. Because with my pupils fully dilated I look even more like a crazed drug addict than usual.

The problem with scheduling the test late in the day, however, is that it is administered in a quiet, dark room....

The lights in the room are turned down....

And my head is resting in the machine...

Well, you guessed it: I tend to doze off.

Yesterday I did particularly badly at the staying awake part. I was actually dreaming at one point. 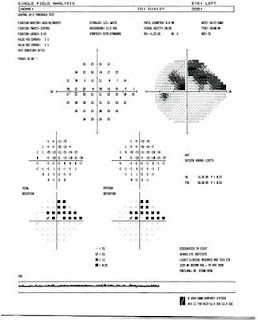 Pictured at left is an example of the kind of printout that the visual field machine generates. It's not my field results, of course.

Mine show dark shadings in the lower left hand quadrant on one eye and, if I recall correctly, mostly on the upper right quadrant of the other.

Yesterday, my results were darker than usual.

And, suddenly, my doctor was happy to see me!

Until, that is, he read further in the test results and saw that my test was "of borderline reliability" -- because I was snoozing.

Still, he has hope now that I am in decline. Just to be sure, though, I'll have to do the test over again in a month, this time in the morning, when (he thinks) I'd be more wide awake.

I've always done poorly at video games. But I wonder if I should try to practice on the kids' Playstation to see if I can't sharpen my skills?
Posted by The Curmudgeon at 9:05 AM

The last time I had this test performed, the doctor stood by the machine and yakked in my ear. It was so distracting that I finally told him to go find something else to do!