A Rose by any other name would stink as much? 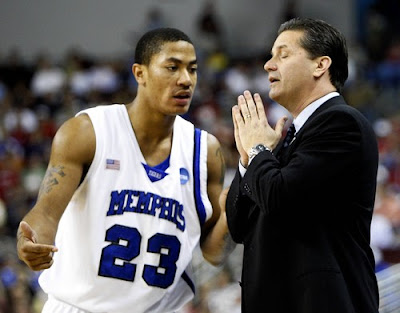 Derrick Rose and John Calipari hooked up for a year at the University of Memphis in furtherance of their individual ambitions.

Derrick Rose was required to spend a year on somebody's campus before he could become the No. 1 pick in the NBA draft. After leading Memphis to the NCAA championship game, he realized that ambition, coming back to his hometown Chicago Bulls this season, winning the Rookie of the Year Award.

Rose and Calipari got what they wanted. And Memphis, which now has neither Rose nor Calipari, must, in addition, forfeit the team's 38 wins from the 2007-08 season. It has to pay back the money it received for reaching and advancing in the NCAA Men's Basketball Tournament. It must even give back its Final Four trophy.

And why must this happen?

Well, Shannon Ryan's linked story in the Chicago Tribune reports that an NCAA investigation has determined that someone else... not Rose... took and passed the SAT so that Rose could gain admission to Memphis. (Rose has consistently denied any wrongdoing.)

See, the NCAA persists in requiring athletes to qualify for admission to college just as if they were students. Now, this makes sense at smaller schools and less competitive programs: Like the NCAA commercial says, most college athletes will go pro in something other than their college sport.

But college basketball, at its highest levels, is Big Business. Millions of dollars are on the line, in contracts for talented players, in contracts for successful coaches, in TV and gate and tournament revenues for schools. In fact, when the NBA started drafting kids out of high school -- depriving colleges of the services of tall mercenaries who could carry big TV ratings on their broad shoulders (and still dunk with either hand) -- the colleges persuaded the NBA to raise the draft eligibility age. According to the indispensable Wikipedia, "As of the 2006 NBA Draft, high school players gain eligibility for draft selection one year after their graduating class has finished high school, but only if they also are at least 19 years of age as of the end of the calendar year of the draft."

So the most talented high school players must keep their skills up somewhere... and making a big splash in the NCAA tournament surely helps with draft position and endorsements. But there is that nagging eligibility problem.... You see, not only must a student qualify for admission (admissions directors can be swayed by a beautiful jump shot just like anyone else) but, to satisfy NCAA regulations, a player must show a certain GPA in certain core courses and adequate scores on either the SAT or the ACT.

Rose had tried the ACT three times in Chicago -- and failed -- according to the linked Tribune article. The controversial SAT test was taken in Detroit.

Rose's reputation will be sullied by this scandal, though the stain will be mitigated at least to the extent to which he fulfills the enormous expectations of professional basketball fans. Unless it is shown that Calipari arranged the bogus SAT exam, he'll probably keep his job at Kentucky. Until he loses. And the University of Memphis plans to appeal the sanctions.

It makes you want to scream, doesn't it?

My boys didn't play competitive basketball after the 8th grade. But Youngest Son has friends who do; some are on the football team with him, others have played baseball with him.

The other night, as the Rose story was breaking, Youngest Son told me that some of his friends are likely to be bumped from the basketball squad at his private high school this year. It seems that the new coach has recruited some talented newcomers. The money has been found for their tuition; they have allegedly met the academic requirements for admission. And these will be installed over the kids who have been in the program right along, cutting playing time, or even roster spots.

Youngest Son says his friends are upset, and he is upset for them.

But, here as in so many ways, high school prepares kids for what lies beyond. Derrick Rose is just a kid who played the game, on and off the court. The real fault lies with the hypocrites who talk about student-athletes... but who recruit slabs of beef.
Posted by The Curmudgeon at 11:03 AM

well that was all about sports, wasn't it? (she's laughing)