The most dangerous place to drive? An Unscientific Survey

I drove this morning. I had to pick up a transcript at a suburban courthouse.

It occurred to me, as I was trying to exit the parking garage, while people were coming in for hearings on their traffic tickets -- driving every which way, mind you, cheerfully disregarding all posted signs -- that this might not be the safest place to be driving the family van.

I did exit safely, however, and jumped on the expressway to join the rush hour parade into the City. 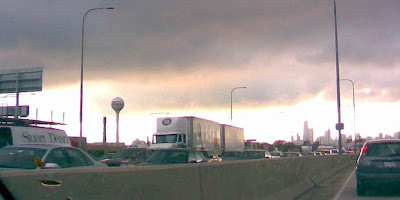 This picture wasn't taken this morning, but it gives you an idea. That terrible traffic on the left is outbound from the City -- some days there's as much coming out as going in.

Anyway, I know some people blanch at the prospect of even entering an expressway, much less navigating through the rush hour. It doesn't bother me. I don't even mind driving downtown. True, the bicycle messengers typically ignore all traffic signals, but they are (generally speaking) proceeding in the same direction as the rest of the traffic in a given spot. If you don't count the weaving in and out, at least. And you almost can't hit one, even if you try -- and, if you did, well, sad to say but pedestrians on the street might cheer for you.

Cabs and buses and delivery trucks do pose substantial hazards -- but you can get used to them. I will admit to being taken slightly aback this morning by someone on a razor scooter, in the street, in the gloom under the elevated tracks, going against traffic as I turned into the parking garage. This, however, was because he and I arrived at the entrance at almost the same moment.

But, again, I was not afraid. I can handle this.

These terrify me. On those few occasions where circumstances compel me to go to a mall, I let Long Suffering Spouse drive. I just sit and cringe. Well, I probably curl up in a ball and cringe.

Which brings us to today's Unscientific Survey: Is there any particular place where you hate to drive? Why?
Posted by The Curmudgeon at 9:13 AM

Is that a picture of the Kennedy Expressway? Thank you for reminding me why I hated driving in Chicago. I was always a fan of public transportation.

I usually take the CTA myself. But sometimes.....

The drivers that give me fits are 1) moms in BMW or Lexis SUVs; 2) 20 year old yuppies in sport cars; and 3) rednecks in big trucks with bigger wheels who are toooo big of a hurry to get to the Super Speedway -- they have speed envy.

At least the traffic seems to be moving.

There is an intersection about 1/2 mile from my house that I avoid like the plague because I had a car accident there a few years back.

It still gives me the creeps even though my boys and I were fine. Our car, however, was not. I just hate to drive through it still.

I-95 in Connecticut between Stamford and New Haven is awful. Really scary a lot of the time.

I can handle Interstate 80 -runs about 4 miles from my house -no sweat. Of course, that is a cakewalk compared to the 6 lanes or so around D.C.; I've manipulated my way through Pittsburgh from one end to the other even during rush hour and I don't "know" that city at all and the 10 lanes around Chicago but I've managed ok to maneuver them too at various times of my life. But, buddy I am with 150 percent on the traffic in shopping malls! Downright terrifying at times!

I hate driving in big cities I'm unfamiliar with and airports make me very nervous, but the biggest thing I hate is driving on those winter days when the sky and ground are the same color on highways in Colorado. Because... everything...just...blends...and...looks...the...same.

So you can't really see a thing.

Most times I love the open spaces, but man, open spaces are terrifying to drive in when you can't see any indiscernible landmarks.

Curmy. drive in CT, the land of the left hand exits and entrances on so many interchanges. Note that the left hand on ramps where you enter into the 'fast lane'. The worst:

All of these are junk designs. Of course, the designers didn't live in CT, but we get to live with their design 'logic'. How bad can the expressways be in Chi Town, anyway??

i hate driving in any freeway for two reasons:

1. a lot of people are driving like crazy, which is scary.

2. i have the tendency to drive like crazy, which is more scary.

I'll answer your question first, and then I have a proposition for you, (no, not THAT kind of proposition!!)- I hate the intersection of Everett and Brinton in Dixon IL, IF you're coming off Everett and wanting to turn left onto Brinton. You can't see over the hill to see if anything's coming, you just have to shut your eyes and pray there isn't...
Now...since I am one of those people who cringe at expressways, I'll do your Christmas shopping if you'll pick up my kids at Midway on Dec. 22nd. LOL!
Shel

Umm... let me add that you still have to PAY for the Christmas gifts I buy for you...*grin*. However, in return I'll throw in gas and lunch for the trip you make to Midway...(Think I've got a future in trial law??)

hi curmie. what's with the word verification? problems? i hope not...

Ralph -- We have some left exits -- the Austin & Harlem exits on the Eisenhower -- and the entrances in the Spaghetti Bowl (the West Loop area where the Ryan becomes the Kennedy) are all from the left.

Bee -- Welcome back. I knew you'd notice right away. In fact, I mentioned you in the post when I announced that I had to go back to word verification for the time being -- a bunch of spammy comments, all at once, prompted the decision.

Interesting question. There are three places I don't drive because I don't have to, and it's less expensive to take trains, cabs or a shuttle bus: NYC, Boston and Chicago.