In today's "Heads or Tails," Barb wants us to answer this question: "What is something you thought you'd never do or say, but now you do?" 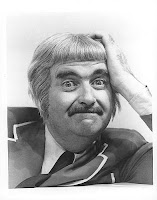 Who among us -- at least who among us who's old enough to remember Captain Kangaroo -- could even have imagined blogging when we were young? ("Counting flowers on the wall/ That don't bother me at all/ Playing Solitaire 'til dawn/ With a deck of 51/ Smokin' cigarettes and watchin' Captain Kangaroo....)

Computers were something vaguely threatening; sometimes they had to be talked to death like James T. Kirk seemed to do so often on "Star Trek." At the very least, they were giant, intimidating things. (They might even be deadly: Open the pod bay doors, HAL....) Oh, sure, they could be made fun of, as in "Desk Set," but we often try to make light of things that scare us. (See, Abbot & Costello Meet Frankenstein.) But who in the early '60's really imagined home computers as our toys and companions? 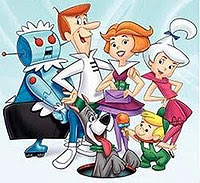 No. In the future, we were going to have robots. (The more sophisticated among us hoped these robots would obey Asimov's Three Laws.)

And we thought for sure there would be jetpacks.

C'mon -- admit it. You thought there'd be jetpacks, too.

We had nightmares about nuclear war ("Wooden Ships on the shoreline, sailing free and easy....) -- but who dreamed of Islamofascism? (Thus, in 1965, Frank Herbert's Dune, set in a distant future out among the stars, the author could use strange, exotic words few readers would have ever heard before: Jihad, for instance.)

We didn't predict the future very well -- not our own futures or the world's. 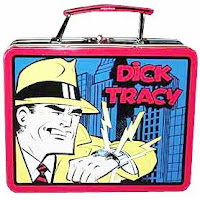 I suppose we might have imagined cell phones -- we did have Dick Tracy talking to his two-way wrist communicator every Sunday in the Comics -- but did we imagine that nearly everyone would one day walk down the street looking like they were talking to themselves?

So, let me venture out on a limb here and say we can never be sure what the future will hold.

I was so sure we were going to end up like the Jetsons!! Great never post!! Have a wonderful Thanksgiving.

All you have to do is watch an episode of Batman. He had a batphone in the Batmobile before cell phones were invented. The computer in the batcave was futuristic 40 years ago, but is primitive by today's standards.

I would like to have a utility belt like Batman and Robin had. I wonder if there is one in my size.

It's funny how many things have happened.. Jet packs aren't too far off!!

I promise not to tell the spammers.

This post is much better I'm sure than the "Bond, James Bond" one would have been!

The Jetson's were TOO cool. I used to love watching it. Astro was my favorite.. but did you ever notice he talked a lot like Scooby-Doo?

I used to think it would be great to have a shoe phone like Maxwell Smart!

You win the next caption contest and I'll try to find you a jet pack. LOL!

Yeah - who'd a thunk it, huh? The computer where I worked back in the mid-60's took up the equivalent space that four middle executive offices had in our building, which was a LOT of space! And, if folks back home asked what kind of work I did and I told them I was a "keypunch operator" they immediately thought I was really a big time computer personage! LOL They were in awe, absolute AWE I tell you, of my ability to "work with computers" and today, lots of those same people do all kinds of fancy-schmancy stuff on a keyboard and some shrunken equipment parked on a desk in their home, off in a little cubby hole, ya know. I just wish I'd learned more way back when I had the opportunity about the programming aspects and that my knowledge had grown with the times.

I so want a jetpack and flying cars!

What a great, great post. I was just telling my husband the other day, that now that he is not working he hs spare time to work on those jet packs.

Flowers on the wall. Gives me jet lag just thinking that far back. Happy thanks giving.

With Maxwell Smart talking into his shoe - how far away could cell phone have been?

I thought that life would be more in tune with the Jetsons too. But we watch so much Sci-Fi TV that it is hard to determine what the future will be like - but the bad guy will always be out there to try and conquer earth!

Hope your turkey treated you well and all the dressing/stuffing was good!

I always wanted the machine that Mrs. jetson got in to get ready ( and perfectly coifed) in under 2 min.