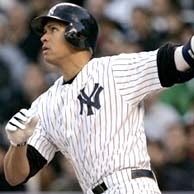 The hero in Greek tragedy was always possessed of a "tragic flaw" -- something that prevented him from achieving his goal. A typical flaw was "hubris" -- excessive, destructive pride.

English majors are free to expand on that basic outline, but this rudimentary understanding came back to me this weekend as I thought of the modern tragic hero, Alex Rodriguez.

A-Rod has talent in abundance. And he has put up numbers in his career that are amazing and outstanding and free from any whisper regarding his chemical balance.

Of course, he hasn't shone as brightly during the post-season -- but that's not his tragic flaw.

A-Rod reportedly walked away from the Yankees, one of the few teams that could conceivably afford his outrageous salary demands, when the Yankees balked at Boras' asking price for A-Rod's continued service: $350 million.

There are teams in Major League Baseball -- whole entire teams -- that aren't worth $350 million.

And Scott Boorish, er, Boras, chose Game 4 of the World Series to announce that A-Rod would be walking away from the Pinstripes.

I understand why every professional athlete would want the most aggressive representation possible: Careers are short and there's always some other hugely talented youngster looking to take your place. A freak injury... plain old bad luck... a poorly timed slump... there are so many ways for the genie to escape the bottle.

But Boras seems so far over the top. I never realized, until I looked recently, that Boras was himself a talented baseball player who never made it to "the Show". Perhaps this explains his hypercompetitive excess on behalf of his clients.

I understand -- but I do not sympathize. A-Rod should be one of the best compensated players in the game. But he already is a millionaire many times over -- is squeezing the last million out of an overeager owner really necessary?

Which means I want A-Rod to sit by the phone for a long, long time.

And I'd like Joe Crede to fire Boras, too. Maybe then -- if his back has really healed -- the White Sox can keep him.

What this means is that I am agreeing on something with Jerry Reinsdorf.

I am deeply conflicted by this.

What's next? Will I agree with Jay Mariotti on something?

*Shudder*
Posted by The Curmudgeon at 9:13 AM

When will common sense step up to the plate? We Cleveland Indians fans have already figured C.C. Sabathia will be gone after next season.

It's a crying shame that the small and mid market teams have become the farm systems for the large market teams.

I don't understand this game, though I know you are passionate about it. I think it adds more fun when the "Greek tragedy" element enters the game. Life would be dull if it always went perfectly and according to plan.

I agree with you - pro athlete salaries are amazingly out of hand.

I'm with Sari, although I don't know who Joe Crede, Jerry Reinsdorf or Jay Mariotti are.

A-Rod was at my house on Halloween. Or it was an 8-year old with a uniform that said A. Rodriguez on the back.
Something like that.