Today's challenge: "Road." If I'd been looking ahead, I could have turned last Friday's post into a perfectly good entry for this week's Heads or Tails assignment.... Ah, well, I shall have to come up with something new then.... 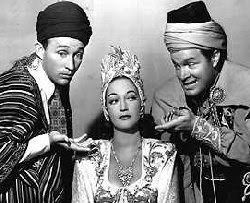 Or, perhaps, I will come up with something old.

That's Bing Crosby, Dorothy Lamour, and Bob Hope in Road to Morrocco, as innocent a bit of cinematic fluff as was ever made and still very funny.

It would probably spark rioting in several countries if it were remade today.

Anthony Quinn played the bad guy -- just as he did in the first "Road" picture, Road to Singapore. 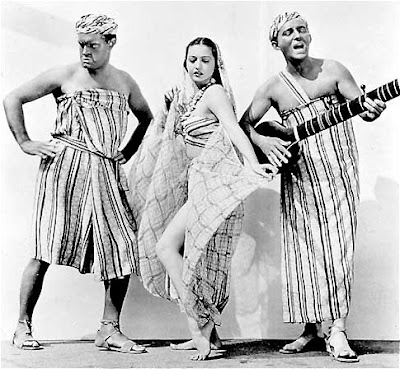 After Singapore, Hope and Crosby next went on the Road to Zanzibar. If you can believe IMDb, Fred MacMurray was offered leads in both Singapore and Zanzibar. 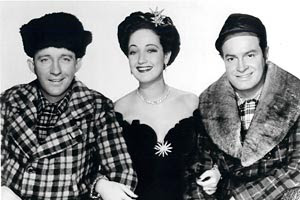 After a time-out for World War II, Bob and Bing went on the Road to Utopia.

If nothing else, this movie illustrates why it is prudent to believe in Santa Claus....

And then there's Robert Benchley's narration. And the talking fish. And the surprise ending -- how did they get that one past the censors?

The fifth "Road" movie, Road to Rio, features a cameo by long-time Hope sideman Jerry Colonna. He was in "Singapore" too. He was more than just a moustache.... 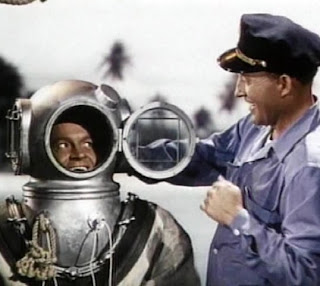 Road to Bali was the only "Road" picture made in color.

This movie must have slipped into the public domain, at least briefly, because it was everywhere, at one time, in the DVD racks for $2.99. This was one of the movies played in "heavy rotation" on "Family Classics" -- the Sunday afternoon movie program on WGN in Chicago.

At some point, no matter how many times I've seen the movie since, I am reminded of Sunday dinner at my grandmother's apartment.

There is one "Road" picture that I haven't seen, Road to Hong Kong, the seventh and last of the series, in which Joan Collins subbed for Dorothy Lamour. (IMDb says Lamour had a cameo in the film, as herself.) And Lamour did a parody of her "Road" character in Donovan's Reef, a South Pacific vehicle for John Wayne, directed by John Ford, which was released around the same time as "Hong Kong." "Donovan's Reef" is appropriate for Christmas viewing when you've tired of all the usual holiday fare, if only for its very unusual Christmas pageant.

So -- you may well ask -- why am I touting you on all these old movies, aside from their arguable connection to today's "Heads or Tails" theme?

Well, if you've stayed with me all the way through this, you deserve an answer: I went to Blockbuster over the weekend, hoping to rent Ratatouille. And it was out.

So I'm hoping this will inspire you to rent something else this weekend, so I can see what I want....

Clever, eh?
Posted by The Curmudgeon at 7:51 AM

GREAT post! Makes me wish we had a video store nearby.

That's great! You and my mom would get along, she loves those kinds of movies. :) Have a great day!

Yes, very clever. I haven't seen any of those movies, but now I think I'd like to. However, we bought our own copy of Ratatouille so it wasn't our fault you couldn't see it. Did you at least get a voucher for a free movie rental? Or do they do that any more?

It's so long since I rented a video, in fact, they are so cheap now, that I just buy them or borrow from a friend. I'm not sure how many of these old classics would be available over here in the UK.

what a wonderful take on this week's theme. Have a great Tuesday!

Those movies always remind me of the holidays, and of being sick (because I love to watch stuff like that when I'm not feeling well).

Keep trying on Ratatouille, it's one of Pixar's best!

Years ago (lots more than I care to remember maybe) the tv channel in our area always carried the old movies from the 30's and 40's and I know on many occasions I watched several of those "Road to" movies by Hope and Crosby and I enjoyed them then. Haven't watched them in eons but I'm going to have to watch the tv guide for when they run again either on WGN (which we get on cable here in PA) or on the Turner Movie Classics network (or is it Turner Classic Movies -always get that confused). Many of the old, old movies are really classics in many ways -usually good to watch, for sure. Thanks for the reminder about them.

Somehow I've made it to 51 years of age and have never seen any of the Road movies! Shame on me!

I have seen Donovan's Reef though. :)

Rent Father Goose (with Cary Grant)if they have it.

Did you always have word verification???

Very fun take on the topic! I've never seen any of those, but they look interesting. :)

I wonder if they packaged all the Road movies into a set....

I know the 'Road' movies well.

The Enterprise Christmas Party Invitation is now on my Journal! Hope you can come.

I promise I didn't rent Ratatouille out from under you. But someone else in my household might have. *ducks*

If it's all the same to you, I didn't get to watch it.

A good blog - and a great read.
I'm finally back on-line and have posted to my blog after 4 months.

I love old movies. I was especially fond of Fred Astaire movies when I was a kid and then Humphrey Bogart caught my imagination.

We have Ratatouille on the Netflix queue-- for the kids of course.

My dad and I watched The Ghost Breakers this weekend. Those old shows from the 40s and 50s are really fantastic, I loved it:
http://imdb.com/title/tt0032520/

These are fantastic shows.. you made me laugh out loud .. remembering all these great ones.

p.s. I remember reading last your last year's psot on the Christmas photo that wasn't .. at Thanksgiving time - - you guys gonna pull that off this year? I'm politikin' for you to write another post on that subject . . .

I may have seen one, but they deserve that i watch them all. I'm going to suggest them for our library movie night in the village.

We haven't rented a movie in ages. I have been wanting to see 'Ratatouille,' though. Hope you see it soon.

I've seen the Road Pictures, most of them anyway. Good fun!

I also like The Marx Brothers. And W.C. Fields.