Yesterday evening, former Illinois Governor George Ryan checked into the Crossbar Motel in Oxford, Wisconsin. (If you don't get the reference, but you want to know the story, click here.)

This morning I read on Yahoo! News that an infamous Boston prison has been turned into a luxury hotel, the "Liberty Hotel." 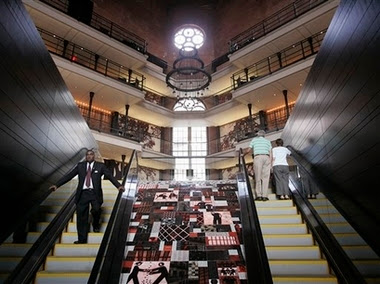 Denise Lavoie's story for the AP says "the old Charles Street jail is now a luxury hotel for guests who can afford to pay anywhere from $319 a night for the lowest-priced room to $5,500 for the presidential suite."

I'm thinking that no current or former President is going to want to stay in a prison, even one converted, according to Lavoie's story, over five years and at a cost of $150 million. On the other hand, Lavoie says that the hotel's guests (it opened in September) have included Mick Jagger, Annette Bening, Meg Ryan and Eva Mendes.

(And I know who three out of those four are. Two for sure.)

The property features a couple of restaurants, Scampo (Italian for 'escape') and Clink (self-explanatory, I hope). And the hotel bar, Alibi, is situated in the former drunk tank.

I wonder if bar patrons have tried to stay the night... either out of habit or suggestion.

Lavoie's article discloses that, "When the jail opened in 1851, it was hailed as an international model for prison architecture." But the prison was anything but luxurious when it ceased operations. According to Lavoie's article, "In the 1970s, the inmates sued over the squalid conditions. After spending a night at the jail to see things for himself, a federal judge in 1973 ordered the place closed. But it took until 1990 for a new jail to be built and the last inmates to be moved."

There are no plans, so far as I know, to remodel the Federal Correctional Institution in Oxford. But Gov. Ryan will have plenty of time, now, to dream about it.
Posted by The Curmudgeon at 11:36 AM

A lot of prisons are already virtually hotels.

Yes, it seems prison is not so bad from what I've read. TV, recreation, college courses...