Frivolous Friday: Everything I need to know I get from the comics, part 4,795

Zach Weiner's Saturday Morning Breakfast Cereal webcomic had this one a few days back... and it struck me as uncomfortably close to true.

Even casual readers will be able to plot my position on this bell curve. Although... Mr. Weiner, Zach (if you'll pardon the familiarity): I have to take issue with you on the labeling of the horizontal axis of your graph. Retirement? A fiction. A fantasy. A fraud. No more real than crystal skulls with mystic powers... or unicorns. (Well, you are young still; sadly, you'll find out.) 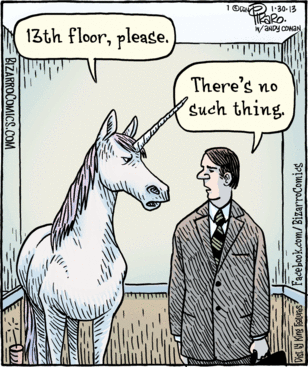 Speaking of unicorns, Wednesday's Bizarro, by Dan Piraro, stuck me as funny. Although I've had an office on the 13th floor of a building before, I've also worked in a number of buildings where there really is no such thing -- the floor immediately above 12 is 14. Since this was the subject of a comic, I guess this must be at least a national phenomenon. Does triskaidekaphobia extend overseas as well? Do office towers in London, Rome or Paris have 13th floors? If the MacArthur Foundation is listening, I'm willing to do field research on this. Starting right now.

Long Suffering Spouse might have appreciated Wednesday's installment of Grand Avenue, by Steve Breen and Mike Thompson, with the principal coming to evaluate the teacher. But my wife, a teacher, doesn't read this blog (or know of it's existence); she doesn't even read the comics. She works too hard. I don't work enough (but I'd still make time to read the comics even if I had more work than I knew what to do with).

I didn't intentionally set out to do a post on comics from Wednesday (although that would be like me, a couple of days late on the uptake); it's just that Wednesday's installment of the ever-sly Brewster Rockit, by Tim Rickard, struck me as the funniest of the week.

I could use a jolt of Dr. Mel's anti-stupidity ray this morning -- if he could just get the settings right.

Posted by The Curmudgeon at 9:19 AM

my building has no 13th floor either. i am on 19 but it's really 18. i guess. maybe... hey curmy there is some sports thing on this weekend. just a reminder. of course i won't be watching.