The dumbing down of America: Anecdotes only, because evidence is too hard

"Anecdote" is another word for story -- and humans communicate by telling stories. Well-designed and thought-out studies, chock full of relevant statistics, are, admittedly, better proof of just about anything -- but every study can be (and for public consumption, must be) boiled down to a narrative. And if that story isn't compelling -- if it doesn't ring true -- the study will be rejected.

And, besides, no one is offering me a grant to design and conduct studies, so I can only offer anecdotes here.

Which, now that this digression is out of the way, I proceed now to do:

You don't think America is dumbing down? Let me illustrate with just my own family: I took Calculus I in high school. (I didn't do particularly well at it -- I retook the second semester of the introductory calculus course in my freshman year of college. But I muddled through.) My wife took Calculus I during her senior year of college. We weren't married then, but we were dating, and although I had made it as far as Calculus III before abandoning the math major (I was done in by Probability and Statistics, which probably goes a long way toward explaining my willingness to accept anecdotes), I proved to be of no help with her homework. By that time, I'd already graduated from law school and begun the practice of law. In other words, my brain had already turned to mush. But my wife muddled through anyway.

We have five kids. Only one -- Oldest Son -- took Calculus I. Younger Daughter married a math major, but Olaf was a rarum avis at their school. There were a bare handful of math majors. Older Daughter's husband, Hank, is an architect and he, too, must have essayed some advanced math in the course of his training. 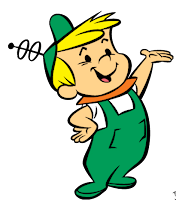 We used to laugh nervously at The Jetsons and Elroy's grade school struggles with calculus. But, surely, that was the direction of progress. It was unusual for kids my age to take calculus in high school -- but, admit it, didn't we all think that this would soon become the norm?

To secure the future, we Baby Boomers knew that we had to master science and math. The Russians weren't going to let up; we couldn't either.

We couldn't all be Einsteins. Some of us would drop out along the way and settle for becoming lawyers and doctors. But our kids would do better than us -- and they would learn more and learn faster. What the heck happened? How in the world did Elroy Jetson turn into Honey Boo Boo?
Posted by The Curmudgeon at 8:57 AM

Email ThisBlogThis!Share to TwitterShare to FacebookShare to Pinterest
Labels: Education

i currently have an offspring that is studying to be a computer engineer and will do fine but dumbing down? oh yeah... hell they can't make change any more curmy!